Top 15 Most Offbeat Attractions in the Great Smoky Mountains 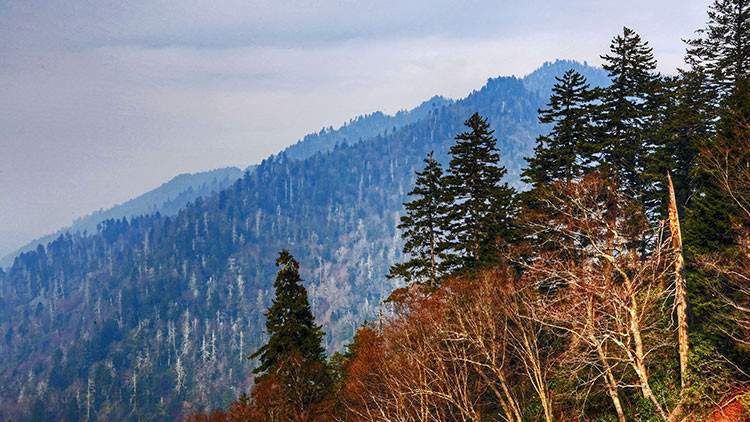 Originally known as Lakeview Drive, the so-called “Road to Nowhere” was conceived in the early 1940s as a second entrance into Cades Cove from the North Carolina side of Great Smoky Mountains National Park. However, due to concerns about its high cost and negative environmental impact, the road was abandoned. Today, visitors can take a 6-mile scenic drive along the Road to Nowhere (it’s located just outside Bryson City) and enjoy scenic mountain views, wildlife and hiking trails such as the Noland Creek Trail. The Road to Nowhere ends at the mouth of a 1,200-foot tunnel (bring a flashlight!).

3. Goats on the Roof – Pigeon Forge

Just like the name implies, this bizarre Great Smoky Mountains attraction features live goats roaming around on the rooftop! However, Goats on the Roof is much more than the “goat-feeding-est” attraction in Pigeon Forge – highlights include an old-time gem mine, well-stocked gift shop with souvenirs, Amish delicacies, ice cream, homemade fudges and more, as well as a thrilling mountain coaster that is 4,375-feet long and reaches top speeds of 30 miles per hour. Note that Goats on the Roof IS NOT a petting zoo – a “goat-cycle” allows visitors to transport a can of goat feed up to the roof.

4. Ripley’s Believe It Or Not! – Gatlinburg

Hundreds of bizarre artifacts, including genuine shrunken heads and the world-famous Fiji Merman, can be viewed during a self-guided tour of the three-floor Ripley’s Believe It Or Not! Odditorium in downtown Gatlinburg. Known as the “modern Marco Polo,” Robert Ripley (1890-1949) amassed an extraordinary collection of curiosities during his travels to 198 countries. Other Ripley’s attractions in Gatlinburg include Ripley’s Moving Theater, Ripley’s Haunted Adventure, Ripley’s Marvelous Mirror Maze, Ripley’s Aquarium of the Smokies, Ripley’s Mini Golf and Guinness World Records Museum.

Sevier County has graciously honored country music legend and entrepreneur Dolly Parton with a life-size bronze statue in her honor that lies in front of the county courthouse in downtown Sevierville. Dolly Parton was born “dirt poor” as the fourth of 12 children in a rustic, one-room cabin in the nearby community of Locust Ridge on January 19, 1946. Erected in 1987, the statue by local artist Jim Gray depicts a young Parton sitting barefoot on a rock with her guitar in hand. Over the years, thousands of Parton fans have made pilgrimages to the site to be photographed with the Dolly Parton Statue. Parton herself has opened several attractions over the years in nearby Pigeon Forge such as Dollywood theme park, Dollywood’s Splash Country Water Park and Dolly Parton’s Dixie Stampede.

The brainchild of Ben Jones, who portrayed “Cooter Davenport” in The Dukes of Hazzard (1979-85), Cooter’s Place serves as a combination store and museum that showcases exhibits and memorabilia from the hit TV series. View the famous 1969 Dodge Charger known as the “General Lee” and browse through Cooter’s Place General Store for an amazing array of Dukes of Hazzard merchandise, including autographed End of the Line CDs featuring the talents of Ben Jones & Cooter’s Garage Band! Cooter’s Place is also home to Indoor Duke’s Themed Go-Karts and Hazzard Country Club 18-hole mini golf course. According to a review of Cooter’s Place in the Entertainment Weekly, “Forget Graceland. The newest Southern-fried pop cultural mecca? Cooter’s, a shrine to the 80’s good ol’ boy hit Dukes of Hazzard.”

The only synchronous species of firefly out of 19 species that call Great Smoky Mountains National Park home, Photinus carolinus synchronize their flashing light patterns in a spectacular display during mating season, which typically takes place during a two-week window in late May to mid-June of each year. It’s the largest population of synchronous fireflies in the Western Hemisphere. Note: Firefly event dates are announced on the official Great Smoky Mountains National Park website in late spring of each year. Tickets are sold in advance (book early – they tend to sell out fast) to watch the fireflies at a designated viewing area near the Elkmont Campground. Shuttles are provided from the Sugarlands Visitor Center to the Elkmont Campground area.

A local institution billed as “the world’s most unusual miniature golf course,” Hillbilly Golf features two Appalachian-themed, 18-hole miniature golf courses built on the side of a mountain and featuring such unusual obstacles as outhouses, moonshine stills and farm equipment. In fact, visitors take an incline trolley 300 feet straight up to get to the top of Hillbilly Golf and then putt their way down the side of the mountain. Note: Hillbilly Golf sustained some minor damage in the wildfires and is set to reopen in the spring of 2017.

Endorsed by the world-famous Titanic Historical Society and shaped like the original ship (it’s half-scale and took $25 million to build), Titanic Pigeon Forge serves as the world’s largest permanent Titanic museum and contains approximately 400 artifacts in 20 galleries. Take a two-hour, self-guided tour, which will give you the sensation of being an original passenger on the Titanic’s tragic maiden voyage in 1912. As you enter the ship, you will receive a passenger boarding pass with the name of an actual Titanic passenger. You will learn the individual stories of several Titanic passengers as you stroll through the hallways, cabins, parlors and Grand Staircase of the Titanic. In addition, you can shovel “coal” in the boiler room, touch a real iceberg, learn how to send an SOS distress signal, reach your hands into 28-degree water, try to keep your balance on sloping decks and visit the Titanic Memorial Room.

View more than 20,000 pairs of salt and pepper shakers from the 16th century to the present day at the only salt and pepper museum in the United States (there is actually a sister museum, the Museo de Saleros y Pimenteros, in Castell de Guadalest, Spain)! Learn interesting facts about the history and functionality of salt and pepper shakers. The amazing collection reflects the more than 30-year obsession of owners Andrea and Rolf Ludden. The Museum of Salt & Pepper Shakers is located in Winery Square in downtown Gatlinburg.

“Something went horribly wrong when test subjects were exposed to Alpha Strain at secret labs all over the world. Could they have genetically altered soldiers to be ultimate destroyers on the battlefield?” A thrilling walk-through adventure and one of the most unique Pigeon Forge attractions, Outbreak – Dread the Undead is billed as “One of the Most Technologically Advanced, Year-Round Haunted Zombie Attractions in the World!” In other words, if you are into live scares, hyper-realistic zombie characters and great special effects, Outbreak belongs on your bucket list. Outbreak is located within the Hollywood Wax Museum Entertainment Center, which also features the Hollywood Wax Museum, 5D Castle of Chaos and Hannah’s Maze of Mirrors. Broadway at the Beach in Myrtle Beach, South Carolina, is home to Outbreak’s sister location.

A two-story, 25,000-square-foot crime museum located in The Island in Pigeon Forge, Alcatraz East showcases the history of American crime and consists of five galleries: History of Crime, Crime Scene Investigation, The Consequence of Crime, Crime Fighting and Pop Culture. Highlights of Alcatraz East include not only items related to Alcatraz Island in San Francisco but also more than 100 interactive exhibits and fascinating artifacts such as O. J. Simpson’s white Ford Bronco from the infamous televised car chase in 1994, Al Capone’s rosary, John Dillinger’s death mask and Al Pacino’s submachine gun from his role as “Tony Montana” in the 1983 movie Scarface, as well as a Bonnie and Clyde collection. The design of Alcatraz East incorporates elements of both Alcatraz Prison and Tennessee State Prison, which opened just outside Nashville in 1898 as the state’s first prison.

Take a “Hollywood-style” trip down memory lane and view this amazing collection of cars from classic movies and TV shows such as the Ectomobile from Ghostbusters, the Drag-u-la from “The Munsters,” the 1969 SS Convertible from “Charlie’s Angels,” the Flintmobile from The Flintstones, the 1981 DeLorean Time Machine from Back to the Future, a squad car from “The Andy Griffith Show,” the jalopy from “The Beverly Hillbillies,” a Daytona Spyder from “Miami Vice,” two Batmobiles from “Batman,” the Mello Yello race car from Days of Thunder and more. Browse through the Hollywood Star Cars Museum Studio & Gift Shop and purchase an in-the-car souvenir photo or die-cast Hollywood collectible.

Just a short, 14-mile drive East of Sevierville lies the historic community of Chestnut Hill, home to one of Tennessee’s most iconic businesses – Bush’s Baked Beans. In fact, Bush Brothers & Company (founded in 1908) produces about 80 percent of the canned baked beans consumed in the United States. Located within the original A.J. Bush & Company general store, Bush’s Beans Visitor Center features a short film highlighting the Bush family history along with modern methods of processing and canning beans, and a giant replica can of Bush’s Baked Beans (the perfect photo op!). Grab a bite to eat at Bush’s Family Café, known for its Southern specialties, homemade dishes, deli sandwiches, hamburgers, hot dogs and delicious desserts. Pick up a souvenir such cookware, cookbooks and Bush’s Beans memorabilia in the authentic General Store.

Well off the beaten path in Great Smoky Mountains National Park lies the Walker Sisters Place, a 19th-century homestead that includes a cabin, springhouse and corncrib. Built in 1859, the cabin was home to Union Army veteran John Walker, his wife Margaret and their 11 children. Six of the Walker sisters remained in the cabin all of their lives after obtaining a lifetime lease on the homestead when Great Smoky Mountains National Park was established in 1934. They continued to live the pioneer life and sold mountain souvenirs to tourists (the last sister passed away in 1964 whereupon the National Park Service took control of the 123-acre farm). The surviving structures that make up the Walker Sisters Place have been placed on the National Register of Historic Places. The Walker Sisters Place is accessible via the Cove Mountain Trail from the Sugarlands Visitor Center or the Little Briar Gap Trail from the Metcalf Bottoms picnic area.