Las Vegas, NV - Feb. 22, 2022 – Las Vegas will be the ultimate destination for ‘80s, ’90s, and ‘00s music fans this spring with “BOOMBOX!” at Westgate Las Vegas Resort & Casino May 11 – 15 and May 18 – 22. This Vegas residency on shuffle will feature live performances from some of the most iconic artists from the past few decades, including CeeLo Green, Treach of Naughty By Nature, Kid ‘N Play, J.J. Fad and Thea Austin of SNAP!

In addition to high-energy performances of their own multi-generational hits, the artists will alternate back-and-forth and collaborate on the concert stage together, accompanied by a live DJ and drummer, nostalgic videos, dancers, and a whole lot more. 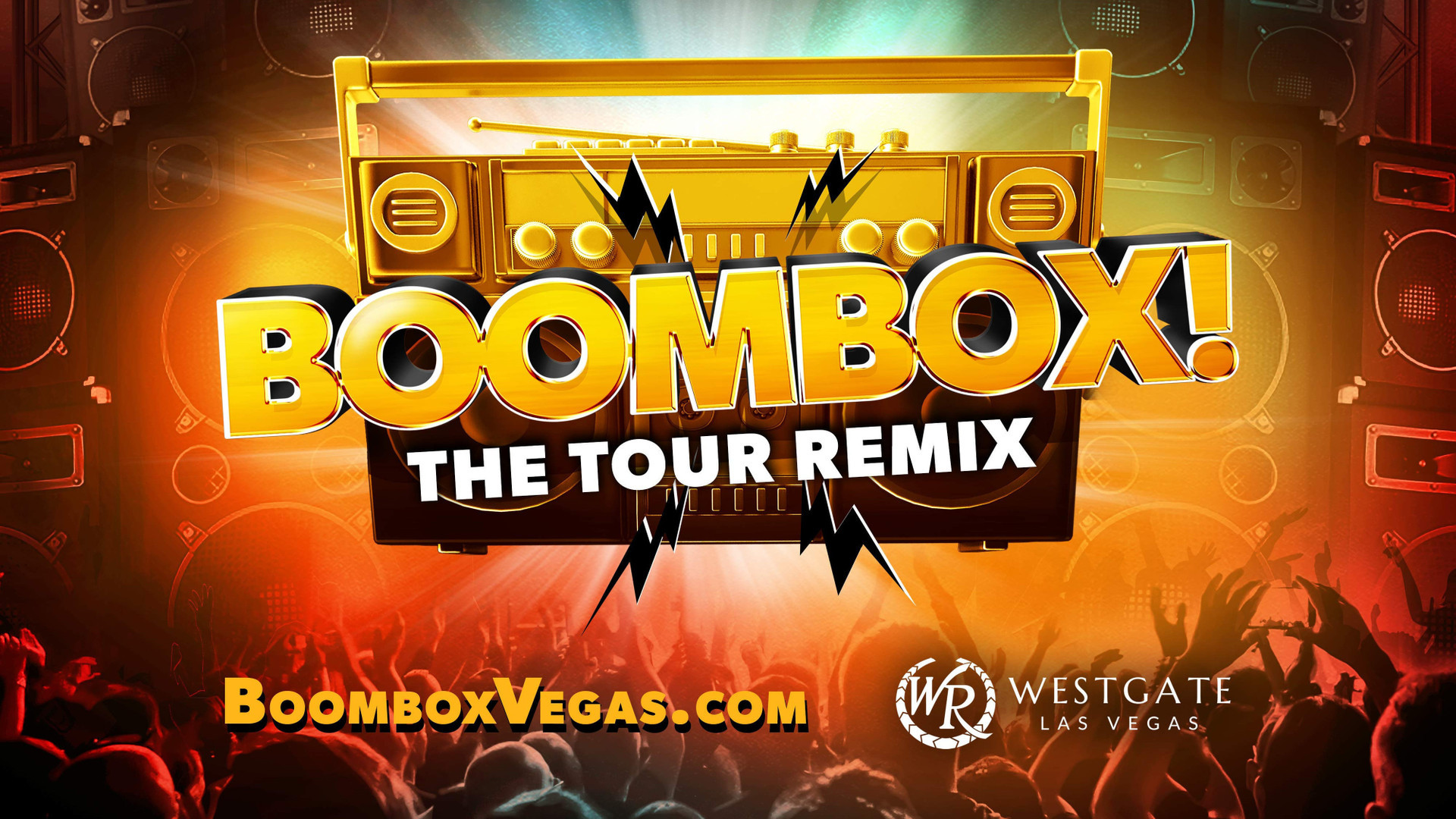 Performances will be held May 11 – 15 and May 18 – 22 at 8 p.m. Tickets ranging in price from $29 to $139 go on sale to the general public beginning Friday, Feb. 25 at 10 a.m. PT at ticketmaster.com. VIP packages, including access to the Block Party with on-stage premium seating, artist meet-and-greets, exclusive merchandise, a commemorative laminate, early entry and more, will also be available for purchase. Artist fans and members of the World of Westgate Casino Rewards Program will have access to presales from Wednesday, Feb. 23 at 10 a.m. PT through Thursday, Feb. 24 at 11:45 p.m. PT.

BOOMBOX! is produced by Fan Rebellion in partnership with VNATION! Warner Music Experience, known as WMX, will handle all merchandising and VIP ticket packages for BOOMBOX!

As an entertainer and businessman with many layers, CeeLo Green cannot be summed up in just one title. He is a five-time GRAMMY Award-winning singer-songwriter-producer, television personality, actor, entrepreneur, pop culture and fashion icon. In 2011, CeeLo received five GRAMMY nominations for his worldwide hit “Forget You” (aka “F—k You”), winning the category for “Best Urban/Alternative Performance.” The single is certified Gold in the United States and Denmark and achieved platinum status in Canada, New Zealand and the UK, and multi-platinum status in Australia. Originally from Atlanta, CeeLo Green first came onto the music scene as a member of the southern hip-hop group Goodie Mob along with Big Gipp, T-Mo and Khujo. He then reinvented himself and formed Gnarls Barkley with deejay-producer Danger Mouse to release the 2006 worldwide hit “Crazy.” The song reached #1 on various singles charts worldwide, and in the U.S., “Crazy” reached #2 on the Billboard Hot 100. In addition to his success as a recording artist, CeeLo Green completed four seasons as a coach on NBC’s hit show “The Voice” alongside Christina Aguilera, Adam Levine and Blake Shelton. With a strong passion and natural talent for acting, CeeLo has big plans to further his career as an actor and film/TV producer. As a result, he has developed his own production company Emerald Productions in partnership with Primary Wave Music, the management company CeeLo signed with in 2010. He was appointed Chief Creative Officer of Primary Wave Music, one of the largest independent music marketing, talent management, and music publishing companies in the U.S.

ABOUT NAUGHTY BY NATURE

GRAMMY Award-winning, platinum-album selling, New Jersey super-group, Naughty By Nature, has a 20-year track record of creating the hits and party anthems that have become the soundtrack to our lives. Their music has smashed through mainstream barriers all while remaining true to the sound, message and grit of the hood. Initially called New Style, Naughty By Nature began performing at talent shows and were discovered by fellow New Jersey native and then-emerging hip-hop artist, Queen Latifah. Eventually signing the group to her management company Flavor Unit Management, Latifah helped them land a deal with Tommy Boy Records. Naughty By Nature’s self-titled debut album was released in 1991 and quickly assaulted the music charts with the instant classic #1 hit “O.P.P.” The group quickly became crossover stars, while maintaining their ghetto sensibility. To date, their success and longevity as a hip-hop group have been unparalleled. The trio went on to produce their follow-up albums that have become part of America’s hip-hop legacy: “19 Naughty III” (1993), “Poverty’s Paradise” (1995) and “Nature’s Fury” (1999). Joining the ranks of Big Daddy Kane, Rakim and Eazy E., the group received their VH1 “Hip-Hop Honors” in October of 2008. The group continues to tour globally, ripping stages from Australia to Canada and New Jersey to South Africa. Naughty By Nature is on their A-game and have no plans to stop anytime soon. Legenday member of this legendary hip-hop act, Treach of Naughty By Nature, will bring you the band’s Grammy-winning hits…and more.

Queens, New York, met in the 1980s. The pair recorded three albums together between 1988 and 1991, all focused on fun lyrics backed by hot friendly instrumental tracks: ''2 Hype'' (1988), ''Funhouse'' (1990) and ''Face the Nation (1991). Among the group's most successful singles were 1989's "Rollin' with Kid 'N Play" which reached #11 on the Hot R&B/Hip-Hop Songs Billboard R&B singles chart, 1990’s "Funhouse" which reached #1 on the Hot Rap Tracks Billboard rap singles chart, and another #1 rap hit, "Ain't Gonna Hurt Nobody.” The group's stage show highlighted their teen-friendly personalities, and dances such as their famous trademark Kid ’N Play Kick Step. Kid's visual trademark was his high-top fade haircut, which stood ten inches high at its peak, while Martin with the low top fade regularly wore unique custom-made jackets. In addition to their music, Kid 'N Play starred together in four feature films, three of which are part of New Line Cinema’s “House Party” series, as well as Warner Brothers’ hit feature, “Class Act.” Their music and trademark dance moves have been featured in commercials for State Farm and RadioShack, and the Kid ‘N Play Kick Step has been performed by Jay-Z, Fabolos and Chris Brown, Meek Mills, Beyonce, and Jimmy Fallon with Will Smith and Brad Pitt on The Tonight Show.

J.J. Fad – comprised of MC JB (Juana Sperling), Baby D (Dania Birks) and Sassy C (Michelle Franklin) – released their self-titled debut in 1988 on Eazy-E’s Ruthless Records along with ATCO and Atlantic Records. The platinum album included the hits “Supersonic,” “Way Out” and “Is It Love.” In 1991, the group released their sophomore album, “Not Just A Fad,” that included the singles “We In The House” and “Be Good Ta Me.” In 1989, J.J. Fad, Jazzy Jeff & The Fresh Prince, Salt-N-Pepa, Kool Moe Dee, and LL Cool J made history as the first artists to be nominated for the Best Rap Performance GRAMMY, an honor that went to Jazzy Jeff & The Fresh Prince. J.J. Fad was also part of the West Coast Rap All Stars that recorded the 1990 anti-violence song “We’re All In The Same Gang.” The group also included Tone-Loc, Ice T, Dr. Dre, MC Ren and Eazy-E, Young MC, MC Hammer and Digital Underground, among others.

Their most popular song, “Supersonic,” has been making a resurgence, having recently been used in multiple television shows such as “Suburgatory,” OWN TV’s hit show “Cherish the Day” “DC Legends,” and “Utopia,” as well as a Nissan Altima commercial.

German electronic dance music group SNAP! had a huge international smash in 1990 with "The Power,” one of the world’s most played dance-tracks. Their 1990 debut album “World Power” has sold more than seven million copies and is one of the most successful dance albums ever. In the early 1990s, Thea Austin joined SNAP!, writing or co-writing all of the songs on their second album, “The Madman’s Return,” including “Rhythm Is A Dancer.” The hit was the best-selling single of 1992 in both Germany and the UK, occupying the #1 slot in Germany for over ten weeks and listing in the US Billboard Charts for a consecutive 39 weeks. A trance-influenced third album, “Welcome to Tomorrow,” appeared in 1994, followed by the single "Gimme a Thrill” in 2000. Snap! has continued performing and sporadically releasing singles and updates of past hits. Thea continues to tour constantly performing the hits she wrote and co-wrote for the group. Outside of music, she has been a staunch global advocate for HIV/AIDS prevention, treatment and cure, as well as global women's health issues.

Fan Rebellion specializes in the development and production of ticketed events and attractions in Las Vegas and across the United States. Fan Rebellion is bringing a new democratized funding model to Las Vegas entertainment, giving everyday investors a chance to share in the success of entertainment events and attractions by giving them the opportunity to participate alongside corporate investors in the financing of each production. For more information, visit fanrebellion.com.

VNATION! is a music and entertainment company for creators. The next-generation record label is committed to empowering our artists to develop their brands on the road to superstardom. VNATION! is led by Kevin Kiernan and James “Jimmy” Maynes, whose combined experience includes numerous platinum records and over $100 million generated in sales revenue. With their leadership, VNATION! is poised to bring the music industry into the future, by being at the forefront of the newest wave of musical experiences, be it on stage, or in the metaverse. For additional information, visit vnation.com.

Warner Music Experience, known as WMX, is a next generation services division of Warner Music Group. WMX is committed to connecting brands and artists with breakthrough content strategies to activate fans and move the cultural needle in creative and engaging ways. With its own award-winning owned media, WMX ranks as a top five video media company for 18-34 audiences in the U.S., generating over 46 billion monthly views. With a focus on commercial services, media business, artist & fan experiences, and audience strategy, WMX sets the standard for innovating artist services with immersive, innovative, and impactful experiences that empower artists to grow their careers and deepen their bond with their fans. For additional information, visit warnermusicexperience.com/.

Westgate Las Vegas Resort & Casino, the iconic world-class destination and the home of Legendary Vegas Fun, offers a unique blend of amenities and excitement with all your favorite table games, hottest slots on the market, incredible restaurants, endless entertainment, more than 225,000 square feet of meeting space and the world's favorite Race & Sports SuperBook®, which is home to Nevada’s largest wagering system and more than 4,500 square feet of newly-updated state-of-the-art HD video screens, in a comfortable, smoke-free environment. Westgate Las Vegas provides a range of culinary adventures with eight Las Vegas restaurants, including the world-famous Benihana Village, the award-winning Edge Steakhouse, now rated the top steakhouse in Las Vegas on TripAdvisor and Fresco Italiano, the top Italian restaurant in Las Vegas on TripAdvisor.

The home of legendary performer Barry Manilow, the property features entertainment options in the International Theater and the Westgate Cabaret and has recently undergone nearly $300 million in renovations that have encompassed every square inch of the property, including the addition of 300 timeshare villas, a new suite of fine dining restaurants, a fully renovated pool deck, 2,100 remodeled Luxe Rooms & Signature Rooms and the luxurious Serenity Spa in Las Vegas, which was awarded the 2017 Forbes Travel Guide Four-Star Award. For more information or to book our Las Vegas hotel, call toll free at (800) 732-7117 or log on to WestgateLasVegas.com.