12 Things Most People Never See on The Haunted Mansion Ride at Magic Kingdom!

These Secrets of Gracey Manor Are Now Yours…

Few rides have captured the hearts of Disney Parks visitors like The Haunted Mansion. An iconic ride since its debut at Disneyland in 1969. Two years later at Walt Disney World in Orlando, Florida, the Gracey estate made its debut in Liberty Square. It’s a must-ride attraction for anyone visiting these iconic parks, and it has legions of dedicated fans worldwide.

While there are differences in the rides between the Disneyland, Walt Disney World, and Tokyo Disneyland versions, most of what we’re sharing are things you can spot at any of them. Of course, per our pact with the late, great Gracey family, we can’t divulge ALL their secrets…but be careful in your doom buggy or soon they’ll become yours. 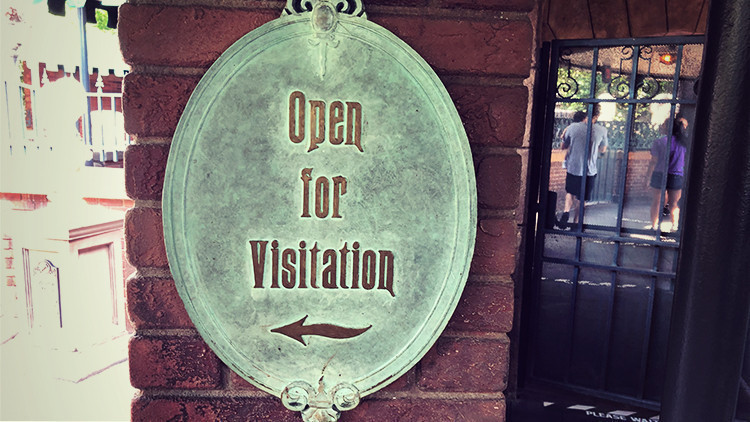 1 | Here's the Hidden Mickey...Sometimes
The first question many people ask when exploring a ride at a Disney Park is, “Where’s the Hidden Mickey?” These little in-jokes are scattered throughout the parks, providing a visual treasure hunt for fans of all ages, regardless how many times they’ve visited. The Haunted Mansion is no exception! There’s only one problem…it can be as tricky as spotting a spirit! Turn your eyes to the table in the ballroom scene as the waltzing duos and dueling ghosts celebrate their eternal birthday party. Seated at the end of a large dining table is an apparition blowing out the candles on their ghostly birthday cake. Guests who gaze down at the dining table can spot a trio of plates that have been arranged to form a classic Hidden Mickey. Sometimes those pesky spirits feel a little prankish and move it, though!

2 | You're a Mean One, Grinning Ghost
As you travel through the graveyard, you’re treated to the a vivacious group of marble busts singing the catchy tune, “Grim Grinning Ghosts.” One of the voices sang another song that became a cultural touchstone all its own… veteran voice actor Thurl Ravenscroft. If you’ve never heard his name, you still know his voice if you’ve ever seen the classic cartoon adaptation of Dr. Seuss’ How the Grinch Stole Christmas. Ravenscroft sang “You’re a Mean One, Mr. Grinch,” a song that’s come to define the most delightful holiday heartwarming since Ebenezer Scrooge had his iconic night. Ravenscroft also voiced several pirates on Pirates of the Caribbean, Buff in the Country Bear Jamboree, and Fritz in the Enchanted Tiki Room. You can also see his name, “Ravenscroft” as the manufacturer name on the ghostly organ you can play simply by placing your hands above the keys while waiting in the queue. [He’s also the narrator on the story album that Disney released in 1969 to get fans excited for the attraction!] 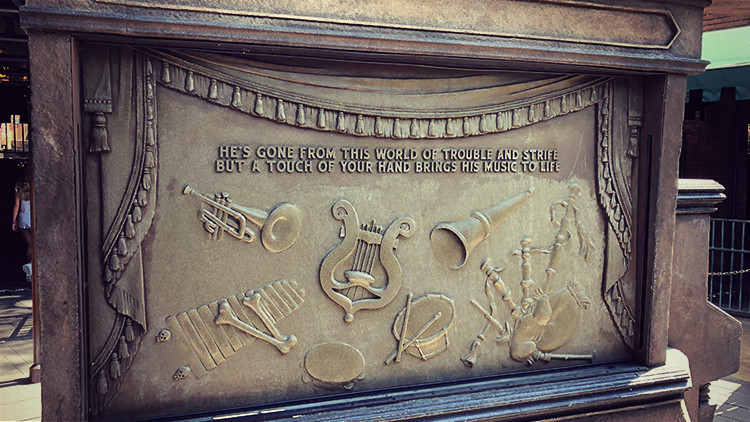 3 | The Rose at Master Gracey's Tombstone
Like the Hidden Mickey, this one depends on the timing. Gracey Manor is named in honor of an influential Imagineer, Yale Gracey, who was selected by Uncle Walt himself to create the effects that helped make The Haunted Mansion the delightful experience it is. Like other Imagineers who worked on the ride, there is a special dedication in the form of a tombstone as you work your way through the queue. On special nights, cast members will lay a red rose on Master Gracey's tombstone as a silent tribute to Yale Gracey. You may never see it, but then again you just might, so keep your eyes open! 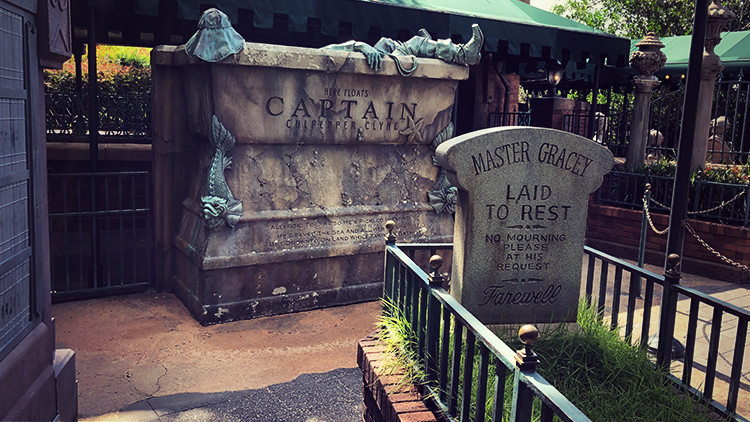 4 | You Encounter Madame Leota Not Once, Not Twice...But *Three* Times!
Speaking of open eyes, your first encounter with the mistress of the macabre, Madame Leota, is in the graveyard just before you enter the mansion. Look for her tombstone to the left as you’re just about to walk in, and you’ll see her eyes open to peer into this world from regions beyond. As your carriage winds through the macabre manor, Madame Leota's disembodied head invokes a spooky incantation from within a floating crystal ball to summon spirits in tune with your sympathetic vibrations.

Madame Leota is based on Imagineer Leota Toombs, but while it's her face you see in the crystal ball, the voice belongs to Eleanor Audley, the vocal talent who spoke Lady Tremaine (Cinderella) and Maleficent (Sleeping Beauty) into being. Leota Toombs’ actual voice is heard at the very end of the attraction beckoning guests to “hurry back” with their "death certificate." 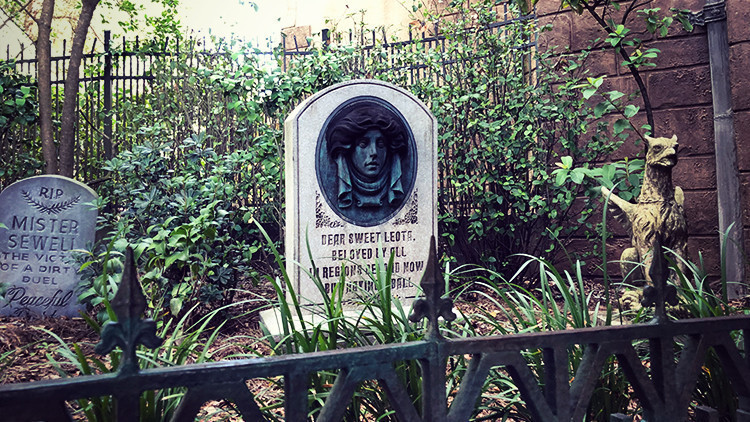 5 | Do You Want to Play a Game?
Hiding things in plain sight is a time-honored tradition. That's just what Marc Davis, a legendary Imagineer who worked his sense of humor into rides from The Haunted Mansion to Pirates of the Caribbean, did...accidentally. As he was working on the attraction, he left his own chess pieces around the models, and one night left them on top. This moment led to them becoming a part of the final design! But there's one piece missing – the Knight. Or is it? As Mr. Davis would say, "It’s not missing. Every evening NIGHT falls on the Haunted Mansion.” 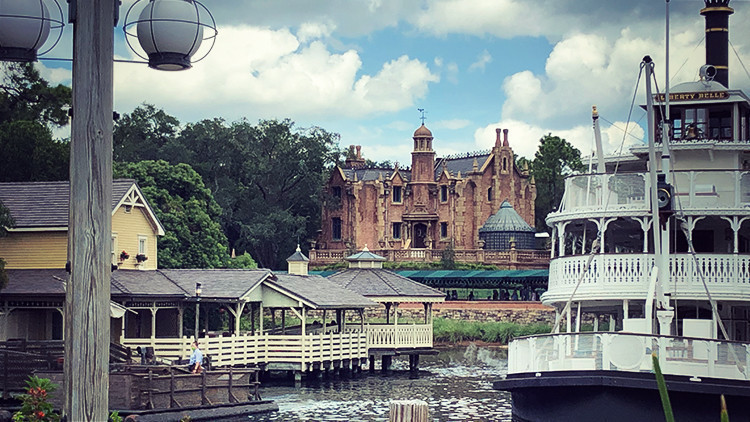 6 | Behold Your Ghost Host!
The Ghost Host was voiced by Paul Frees, a prolific actor, composer, songwriter, and voiceover artist. His disembodied dulcet tones are essentially the voice OF The Haunted Mansion, from the moment you enter to the moment you depart your carriage. [And we all owe a hat tip to voice-over artist Paul Frees impersonator Joe Leahy for providing some modern additions like bilingual safety instructions.] But did you know you can actually SEE the Ghost Host on the ride? The portrait of the Ghost Host hangs on the wall after you pass the casket with the hand escaping, as you’ve turned backwards. It hangs on your right before you swivel around and see the grandfather clock. Around his neck is the rope that served as his entry to the mansion, and in his hand is the axe that he used to climb down! 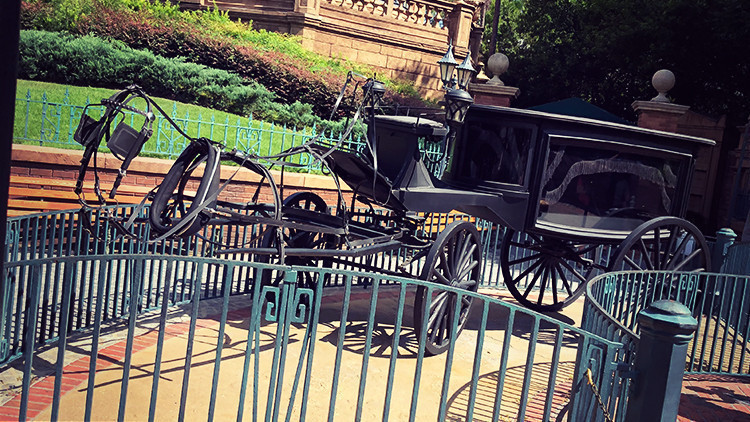 7 | Smile for the (Hidden) Camera
In April 2019, the the hall of portraits added a new trick. After your doom buggy takes you on a tour of portraits shifting spookily on their canvases with each flash of lightning, be sure to say BOO as you reach the last. The flashes of lightning hide a camera taking your ride picture! If you have a second-generation magic band, the picture will automatically sync to your Photo Pass account.

8 | The End of Mr. Toad's Wild Ride
As you’re leaving the attraction in Walt Disney World, look to your left and you’ll see a special graveyard for pets of The Haunted Mansion. Look closely and you'll notice that, in the middle of the pack in the back, Mr. Toad likeness is bidding adieu. Mr. Toad’s Wild Ride was an opening day Fantasyland attraction in Walt Disney World that was replaced by The Many Adventures of Winnie the Pooh. At least now his memory can endure close to where his ride once operated. 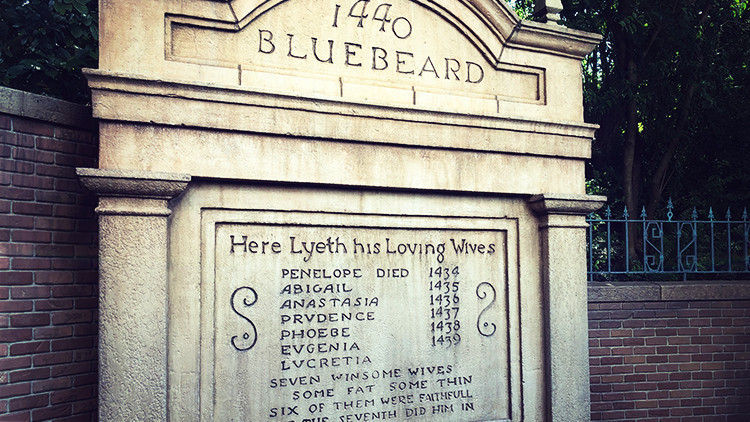 9 | Haven't You Seen That Somewhere Before?
The pipe organ in the ballroom scene should look familiar to any longtime Disney fan. It's Captain Nemo's from the classic Disney film, 20,000 Leagues Under the Sea! The one important distinction is that the organ is a replica in Walt Disney World's The Haunted Mansion, but it's the actual set piece from the movie in Disneyland! 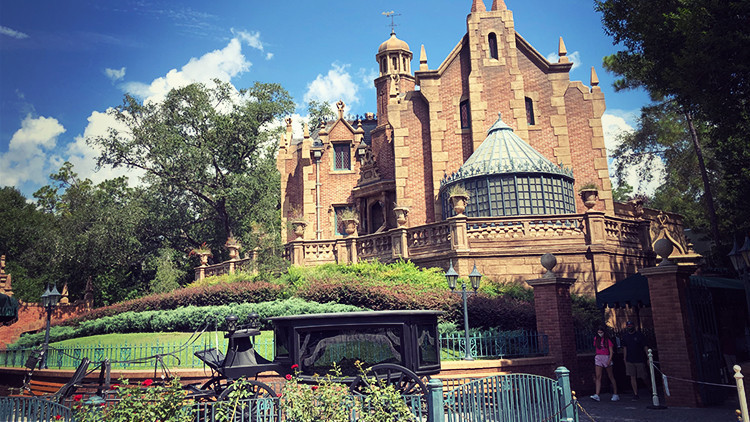 11 | Pay Attention to the Shadows
As your doom buggy rolls past the ghostly piano that appears to be playing on its own, look down at the floor. While the player is invisible, his shadow remains to remind you that the instrument still need assistance to play. Be a respectful audience, and appreciate the work of a musician so dedicated to his craft that not even death could stop his desire to bring music to the world. 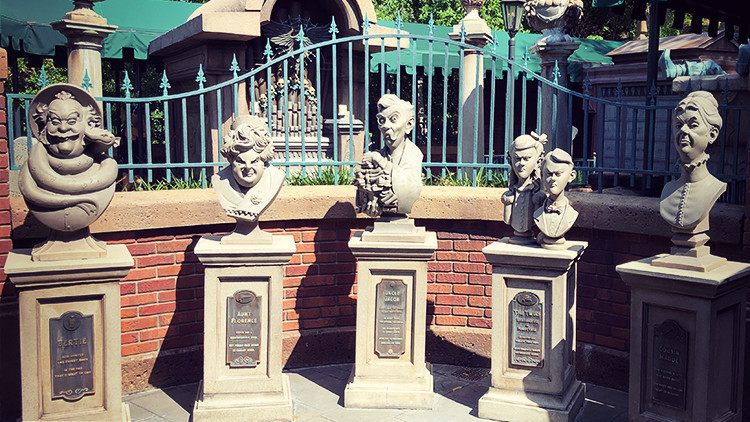 12 | A Heartbroken Memento Mori…from an Everyday Frustration
As you exit the ride, look on the ground for a wedding ring stuck in the pavement. It’s the bride’s ring you see in the attic scene. The story most go with is that it was thrown from the attic and then trampled by the invisible horse. The true story of the ring’s origin is actually a testament to how inventive storytelling can make even the mundane insteresting. The ring is part of a pole that was a part of a crowd control fence that couldn’t be removed from the ground. Since it couldn’t come out, they turned it into a ring embedded in the pavement and let the legend grow from there!

Of course, for the foolish mortals who are die-hard fans of the Haunted Mansion - and there are MANY of us! - there’s the devoted work of Disney Dan and his 10-hour loop of the sights and sounds from the Haunted Mansion attraction. For added relaxation, it’s looped with a calming thunderstorm effect, giving you the perfect excuse to see if your sympathetic vibrations can conjure up the ghostly occupants of Gracey Manor state of mind, wherever you might be. 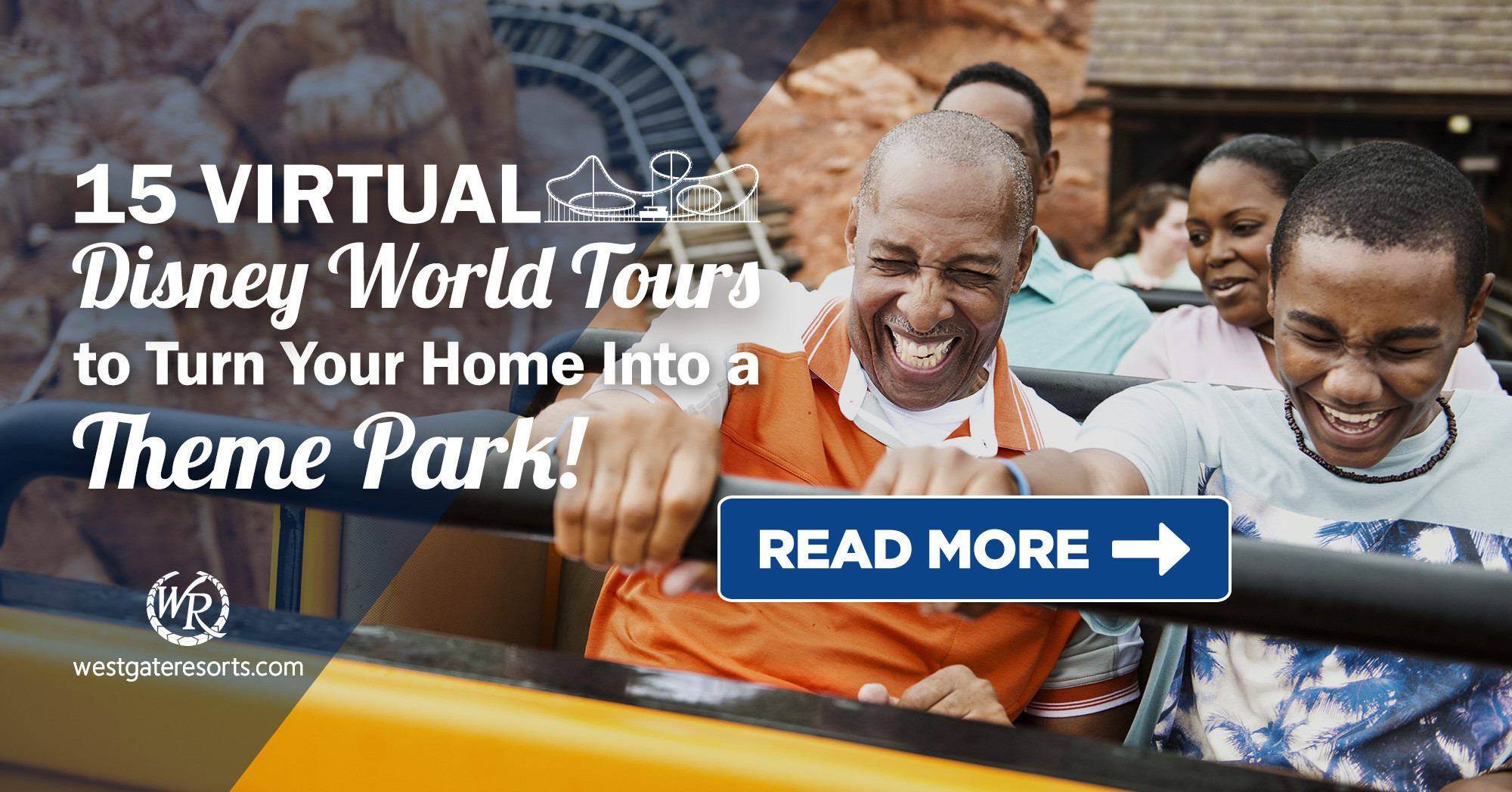