10 Things to do Off the Beaten Path in Las Vegas

10 Things to Do Off the Beaten Path in Las Vegas

“Las Vegas is a city built on hopes, dreams, and a little bit of crazy.” – Michael McDonald

Before you try everything off the beaten path that Las Vegas has to offer, let's ask this - have you ever been to Las Vegas? Whether you've got a reserved suite at your favorite Las Vegas hotel, or you’ve never been there, we're sure you’ve seen a fair dose of the glitz and glamor in such classic (and not so classic!) movies as Ocean’s Eleven (1960), Viva Las Vegas (1964), Diamonds Are Forever (1971), Casino (1995) and The Hangover (2009). And let's face it, based on what you’ve seen, it probably seems like Vegas overflows with an endless amount of night-clubbing/partying, gambling in casinos and eating at expensive restaurants,... all interwoven with moments that,... ahemm, should probably stay in Vegas or deeply buried on your private mobile picture stash. You know what we mean! And listen, stereotypically speaking, you’re not mistaken – Las Vegas is actually filled with places and moments like this.

However, not everyone is into that kind of loud, flashy city life. Some visitors to Las Vegas actually prefer areas that are a lot calmer, more artsy and cultural,... and in general, are off the beaten path - so-to-speak.

If you'd prefer to take a break from the flashy, full frontal fiascos of the world-famous Las Vegas Strip, you should check out this list of 10 things to do off the beaten path in Las Vegas. These places are not too far from the heart of the city – just a couple of hours away – so you can relax and unwind from the hustle and bustle of the Strip for a little while.

1 | Hike the Red Rock Canyon | Not too far from the Las Vegas Strip lies a more natural side of Nevada far, far away from all the glitzy lights. For example, you will definitely want to add a visit to Red Rock Canyon National Conservation Area to your itinerary. Red Rock Canyon, which lies within the Mojave Desert, is a totally amazing place with a totally different vibe from the Strip as you can probably imagine. With 26 beautiful hikes and trails to choose from, Red Rock Canyon tops the list of outdoor attractions in Las Vegas as the perfect outdoor recreational destination for both hikers and bikers. In addition, rock climbing is a popular sport here. It also boasts a 13-mile scenic drive with a bunch of scenic stops along the way.

2 | Enjoy the Fremont Street Experience | There is a particular time when all casinos in Vegas turn off their lights. This is because of something spectacular called the Fremont Street Experience. Thousands of people come out to experience this amazing light and sound show. The casinos turn off their lights when the huge Viva Vision is about to come on. Viva Vision is the largest LED screen in the world and it is used to achieve the Fremont lights and sound show. You can also go on a zipline ride if you’re interested (and you most likely will be!). Fremont is an old part of Vegas that is gradually becoming as modern as other parts of the Strip. If you wish to experience the old Vegas spirit, you need to hurry down to Fremont and catch the Experience!

3 | Take a Trip to the Hoover Dam | You might have heard about the Hoover Dam before. If you’re in Las Vegas at the moment, you can easily drive down to see the world-famous dam, which was dedicated in 1935 by President Franklin D. Roosevelt and originally named Boulder Dam (it was changed to Hoover Dam in 1947 in honor of President Herbert Hoover). It’s just an hour away from Vegas. A lot of ingenious engineering went into the successful completion of the dam, which is 726 feet high and 1,244 feet wide. You can take a tour of the Hoover Dam to get a feel of this famous landmark. A trip to the Hoover Dam promises to be a great adventure for the entire family.

4 | Explore the Neon Museum | Back in the 1990s, Neon signs were used in casinos all over Las Vegas. Nowadays, it’s LED signs that have replaced those neon signs. Popular casinos like the Stardust and Fitzgeralds had such amazing neon signs. Fortunately, those and other neon signs were not thrown away. Instead, they have been preserved in the fascinating Neon Museum. The neon signs collection in the museum features signs from as far back as 1996. Some of the signs have been restored and light up at night. Therefore, it is best if you visit the museum at night, although the museum is also open during the day. You should definitely take out some time to visit this historically significant museum the next time you’re in Vegas.

5 | Sample Delicious Chocolates at the Ethel M. Chocolate Factory | For some reason, this reminds many visitors of the Willy Wonka & the Chocolate Factory movie (the original 1971 classic starring Gene Wilder, not the inferior 2005 remake!). Well, Ethel M doesn’t actually have Oompa Loompas running around in their factory. That would be such a sight! What they do have is wonderful chocolate and free chocolate tastings – sounds great, yeah? Who wouldn’t love to taste some free samples? If you have $15 to spare, you can pay for a bigger chocolate tasting. Apart from all the chocolate awesomeness, you get to explore other things at this chocolate wonderland. One of the highlights, for example, is the large cactus garden in the compound. Believe it or not, this garden, which is home to several other desert plants, is among the largest of its kind in the world. There are more than 300 species of cactus in the garden, which serves as a natural environment where you could take a stroll while enjoying a nice view of some rare plants. The Lion Habitat Ranch and the Henderson Bird Viewing Preserve are also great places to visit while in Henderson

6 | Visit Boulder City | Surprisingly, Boulder City is a small town in Nevada that prohibits gambling. There isn’t any particular fun fare or intriguing sightseeing associated with Boulder City. This town is just a really calm and serene place when compared to the loud and flashy life along the Vegas Strip. You might be interested in knowing that Boulder City, which is located on the way to Hoover Dam, was initially built to serve as a residence for the dam workers. It then went on to thrive and expand to a population of 15,000 long after the dam’s completion in 1936.

7 | Check Out the Golden Nugget Shark Tank Slide | Here is a really cool feature that you don’t get to see anywhere else but Las Vegas. The Golden Nugget features a water slide that passes through a shark-filled tank. It may sound scary to some – but don’t worry, it’s totally safe. Apart from gleefully gliding through a shark tank, there is a pool that’s open to guests. The Golden Nugget is also in Fremont. So, if you’re in the area for the Fremont Street Experience, feel free to check out the Shark Tank Slide.

8 | See the Christmas Cactus Garden | Remember the Ethel M. Chocolate Factory? A year-round destination, it also offers an amazing experience for the Christmas season. Those cactus plants that beautify the compound are usually decorated with a lot of beautiful lights. It is not every day that you get to see a cactus tree covered in Christmas lights. The Chocolate Factory is a magical place during the winter holiday season. You should consider adding it to your list of side attractions to experience when you’re in Las Vegas during the Christmas holidays.

9 | Play Arcade Games at the Pinball Hall of Fame | You would really enjoy spending time in this place, especially if you’re a lover of classic arcades. This place is full of nostalgia-inducing arcade games like the Super Mario Brothers joystick arcade. It also has the most pinball machines on the planet – just like the name suggests. This is a real great place to visit with friends and family, especially if you guys had a lot of arcade fun during your younger days. We are sure you’ll get a rush of old memories as you play some of the arcade games in the hall.

10 | Watch the Silverton’s Mermaid Swimming Show | Mermaids in Vegas? What? These are questions that might have crossed your mind. At the Silverton Casino, you get to experience a fascinating mermaid show. Let’s face it, you don’t see this sort of thing every day. You can spend some time here if you’re in Vegas and you want to get some “aqua” experience. Not only do you get to see these mermaids swim, but you also get a wonderful sight of rare, exotic fish. There are jellyfish tanks and a huge 117,000-gallon saltwater tank that contains the earlier mentioned fish (the rare, exotic ones). Don’t miss it!

If these 10 things to do off the beaten path in Las Vegas are not enough for you, you could also make plans to visit Spring Mountains National Recreation Area. This amazing place is found in the Las Vegas Valley and it has an unusual tendency to get ice cold. Known as Mount Charleston to locals, Spring Mountains serves as a ski resort during the winter season. If you’re big on skiing, you can rest assured of having enough white-powder snow to ski on in this place. There are other nice places off-the-beaten path like the Tule Springs Fossil Beds National Monument, Valley of Fire State Park, and more.

Before you head out to these Nevada hotspots, make sure to do some extra research on these places to get additional information about their services. You can rest assured that you will always find somewhere to take a break from the noise and life of The Strip when you just need a change of pace. You just have to drive a couple of hours away from the city and you will get to see amazing and memorable sights. Heading out to Vegas for a romantic weekend? Check out the best Las Vegas attractions for couples, and don't forget to hit the best breakfast places Las Vegas has to offer after your big adventure! 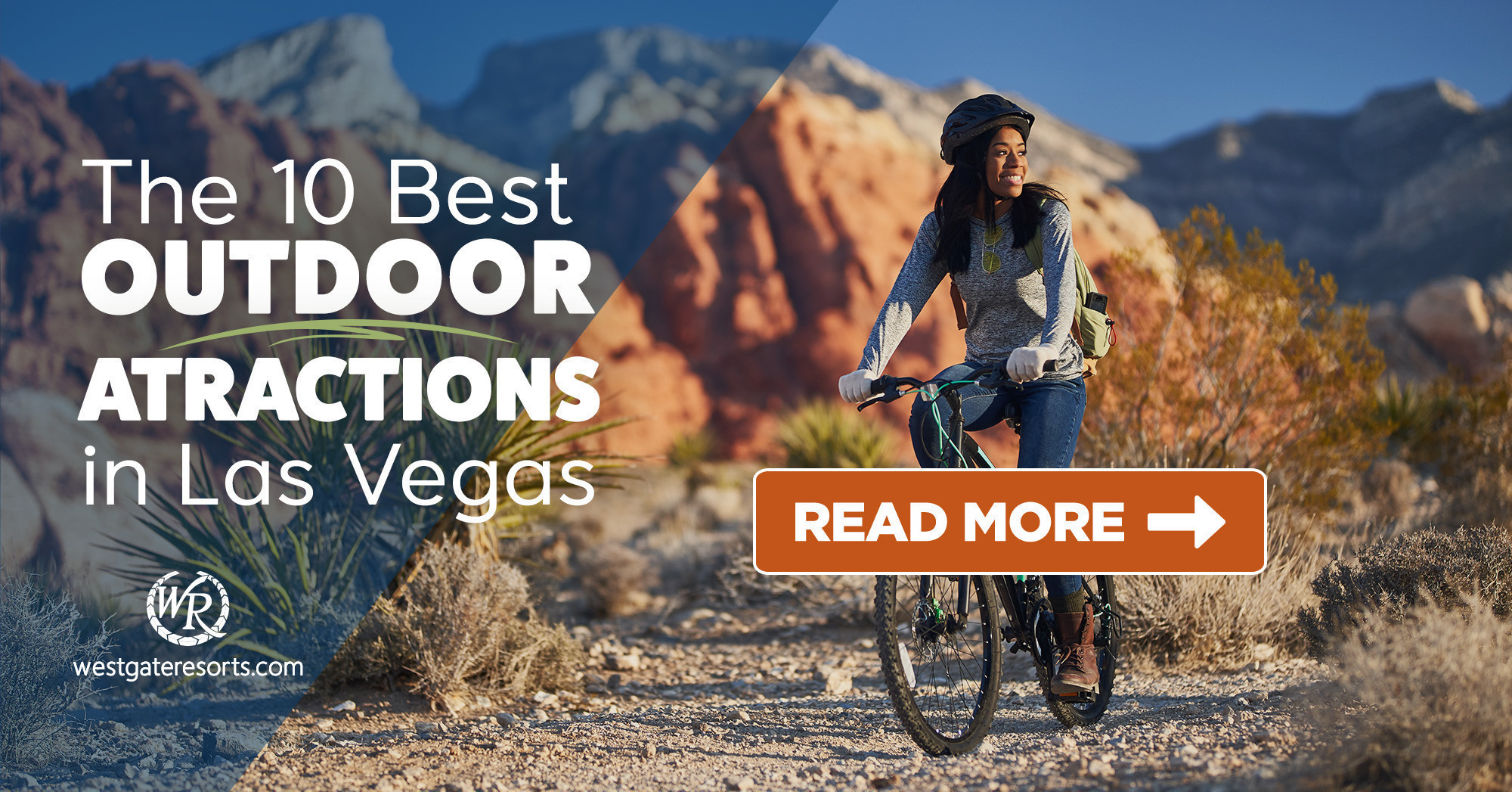