15 Virtual Disney World Tours to Turn Your Home Into a Theme Park!

15 Virtual Disney Tours to Keep You Going While At Home!

“Times and conditions change so rapidly that we must keep our aim constantly focused on the future.” – Walt Disney

As sure as Peter found Wendy, Walt Disney World’s magic can still find you, whether you're just checking in to your favorite Orlando hotel near Disney, or sitting from the comfort of your favorite home streaming service. True, nothing tops the fun of walking through Walt Disney World in the warm Orlando sun, but we can show you how to sneak you away with a pinch of fairy dust and some imagination.

These awesome online experiences will help you feel the glow of eternal childhood from the comfort of your own home. Regardless of your thoughts on the average cost of a Disney vacation, and whether your favorite park is Magic Kingdom, EPCOT, Animal Kingdom, or Disney’s Hollywood Studios, there’s a piece of Walt’s enchanted realm here for you.

That’s why we’re bringing these 15 virtual Walt Disney World experiences to help you turn your home into a theme park escape all its own. We’ve got them listed out here, but let’s be clear: all of them are worth your time.

Not every water ride is a soaking experience, with most being serene journeys that allow you to appreciate the work of the Imagineers to transport us from the real world into magical realms where imagination rules the day. They're some of our favorite experiences, giving us a chance to slow down and appreciate the wonder that we've had since childhood. 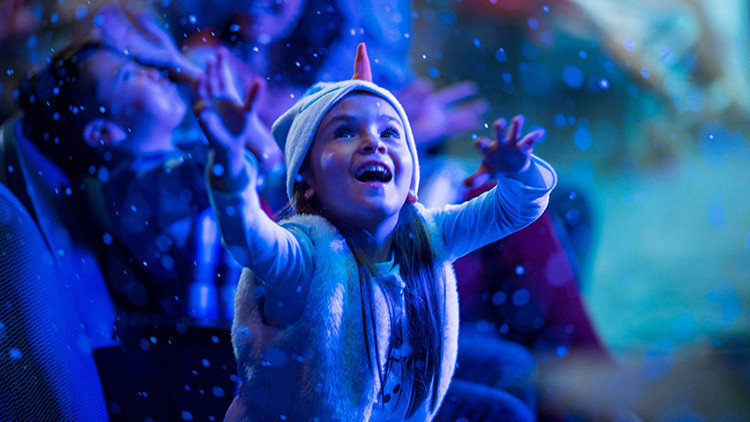 For modern princesses, or any fan of smart fun and adventure for that matter, Anna and Elsa of Arendelle are the quintessential modern Disney icons. They’ve carved out a spot for themselves in the International pavilion with the Frozen Ever After ride. Join them virtually for an adventure on the Frozen Ever After ride, and let Elsa herself send greetings to you and your family. 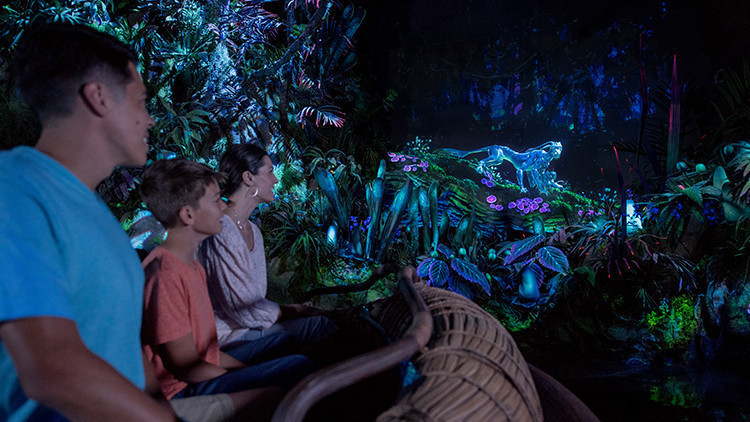 One of the areas in Disney’s Animal Kingdom most in demand is the land of Pandora. It’s a stunning achievement from every perspective, from the breathtaking realism of the foreign environment to the authentically believable Na’Vi culture that’s celebrated with live performances and whimsical creations. You enjoy the movie that started the phenomenon on Disney+, but why settle for that? Experience the visual wonder of Pandora virtually, with a first-person perspective on the Na’vi River Journey.

10 Ways Westgate is Giving Back And How You Can Too!

10 Ways for Families to Deal with a Delayed Vacation

10 Ways To Have A Spa Day At Home Complete With Checklist! 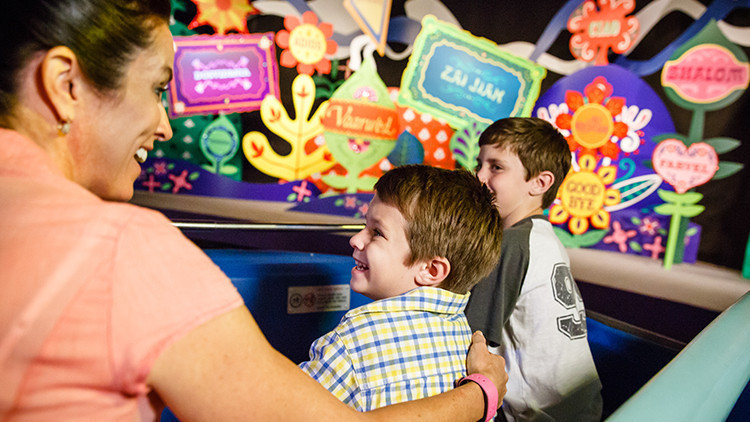 If you ask any guest, from the hardcore Disney fan to the casual visitor, no trip to Walt Disney World is truly complete without the tranquil boat tour on the iconic It’s a Small World. Uncle Walt wanted us to know that our similarities are greater than our differences, and this ride speaks to his eternally hopeful message. It’s the song that every kid from 1 to 100 knows by heart, so take a virtual ride on the landmark attraction that reminds us that we’re all part of the same global family.

WELCOME TO OUR WORLD 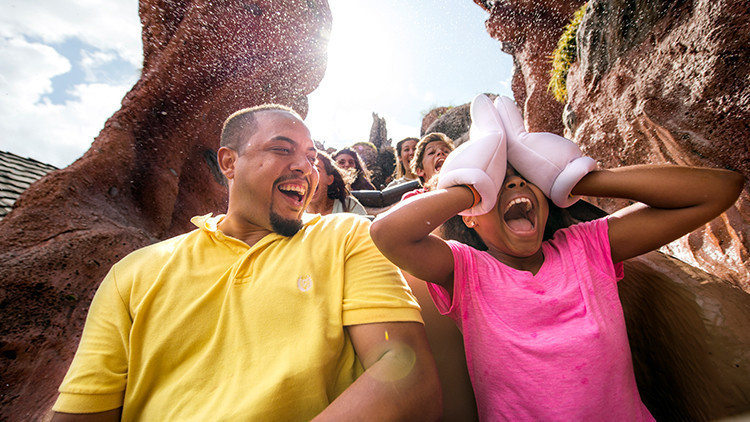 One of the most iconic Walt Disney World rides, Splash Mountain commands long wait times and requiring plastic bags to keep your valuables dry. But don’t let distance keep you from enjoying a ride through Brer Rabbit’s whimsical home. Witness first-hand one of the most famous drops in the world without getting wet (…but if you want to have a little extra fun with your family, keep a cup of water next to you and give them a little splash of excitement at about 10:14). Fire up your screen for a 360 degree experience online!

SPLASH IT UP IN THE SOUTH! 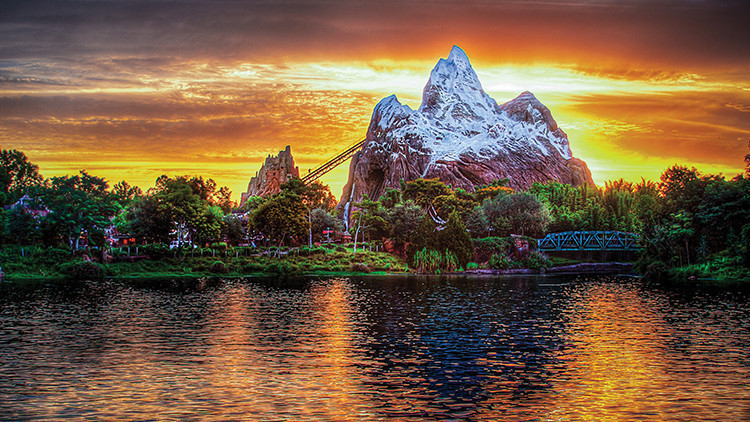 Disney’s Animal Kingdom hides many exciting treasures, but none are more exhilarating than Expedition Everest. The ride up gives you beautiful views of the landscape outlooks in all of Walt Disney World on the way up, you’ll race backwards, forwards, and around in circles to avoid the fabled Yeti. 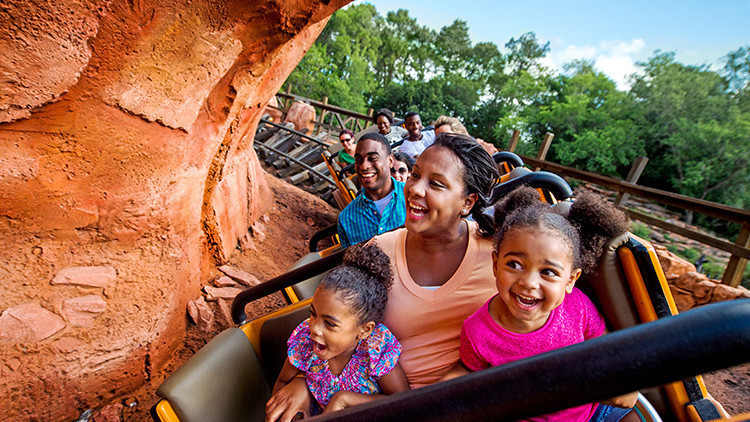 If thrills are more your speed, (virtually) jump onto the Magic Kingdom’s exciting Frontier Land ride, Big Thunder Mountain Railroad! One of the first Disney rides to use computer-aided design, it’s a constant crowd pleaser. Get one of the best seats on a rambunctious train ride on a fictional rail line as it careers through cursed lands in this virtual video experience.

(While you’re at it, take advantage of your time online to explore the little-known backstory of this coaster beyond what’s hinted at in the queue line.)

THIS HERE'S THE WILDEST RIDE IN THE WILDERNESS! 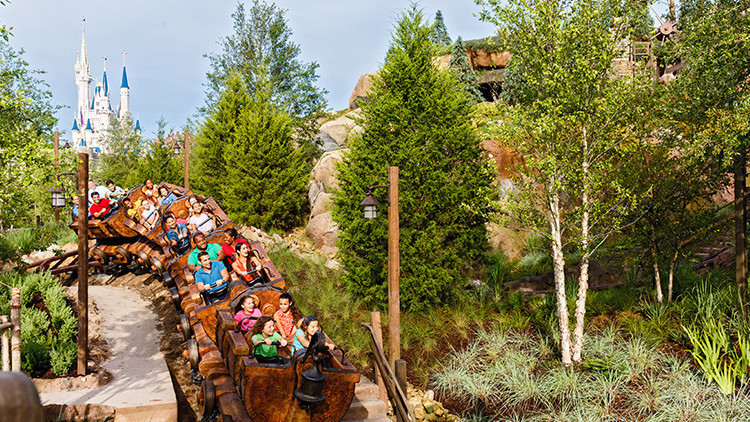 Big Thunder Mountain is a wild ride, so if you want to try a smoother experience, hop across Magic Kingdom to the Seven Dwarfs Mine Train, the Walt Disney World ride that became an instant classic thanks to its unparalleled theming, ride engineering, and smooth experience. The most crowded days can see wait times up to two hours, so skip the line and whistle while you work your way through the Fast Pass lane on this virtual sample of the ride that’s become an instant Walt Disney World classic. 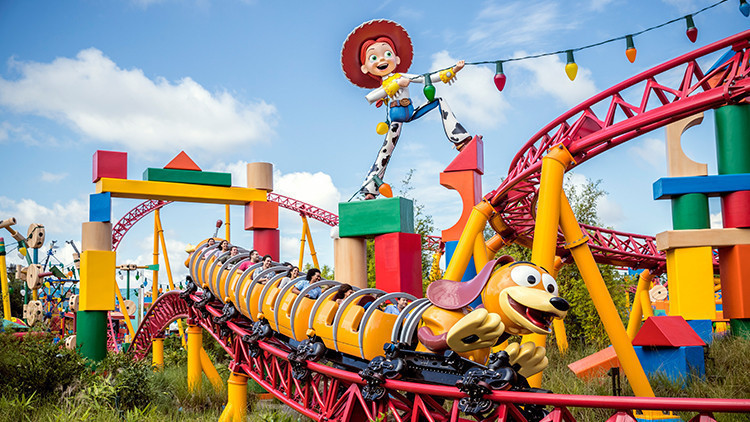 You’ve got a friend in us, and we’ve got a tip for you: The Slinky Dog Dash in Toy Story Land is a real treat. A multi-stage coaster with excellent theming, visitors flocked immediately to it in long stand-by lines of 90 to 120 minutes that nevertheless ended with big smiles. At least half that line is out in the hot sun…all the more reason to enjoy a bit of Toy Story Land on the Slinky Dog Dash virtually.

Simulators blend convincing environments and advanced technologies to give you an experience that taps into the bottomless resource that never fails: your imagination. These virtual experiences might not put you in the precise environment, but they’ll put you there in spirit. 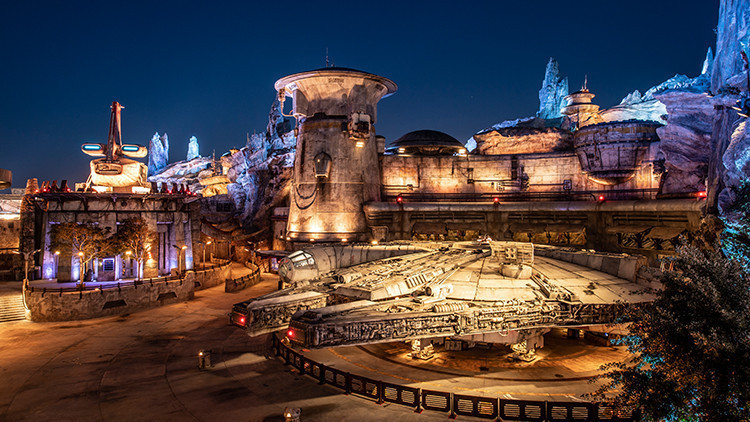 Are you in the mood instead to smuggle some coaxium through the clutches of the First Order? Take notes and enjoy the virtual presentation of the great first attraction at Star Wars Galaxy’s Edge: Smuggler’s Run. Hondo Ohnaka and Chewbacca need your help piloting the legendary YT-1300 light freighter, the Millennium Falcon, to deliver this precious hyperdrive fuel to the Resistance. Prepare for your time in the cockpit with this virtual experience online.

MAY THE FORCE BE WITH YOU...

10. Soarin’ Around the World 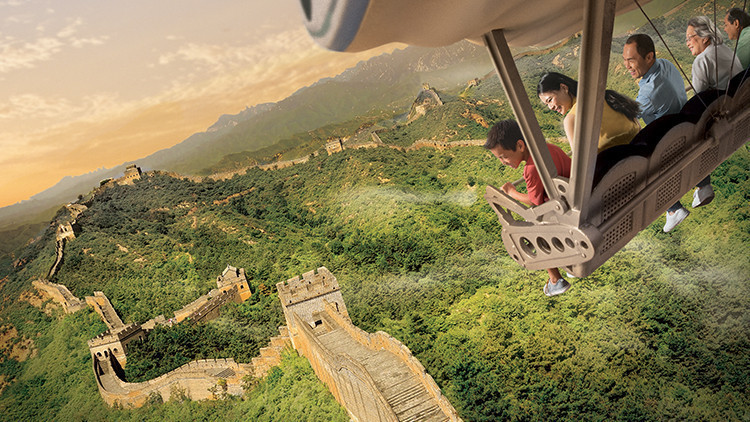 Discover the joys of suspended animation - a state of bliss - when you start Soarin’ Around the World. One of EPCOT’s signature rides, people thrill to the virtual experience of flying above the wonders of the world as wind effects simulate gentle flight in front of an immersive screen. Start the virtual recording and place on a small fan next to you for a complete in-home experience, and lift your spirits to where your imagination can soar.

“Dark Ride” is a term for a ride or attraction that takes you on a controlled track through an indoor, controlled environment. It’s no secret Walt Disney World has some of the best. 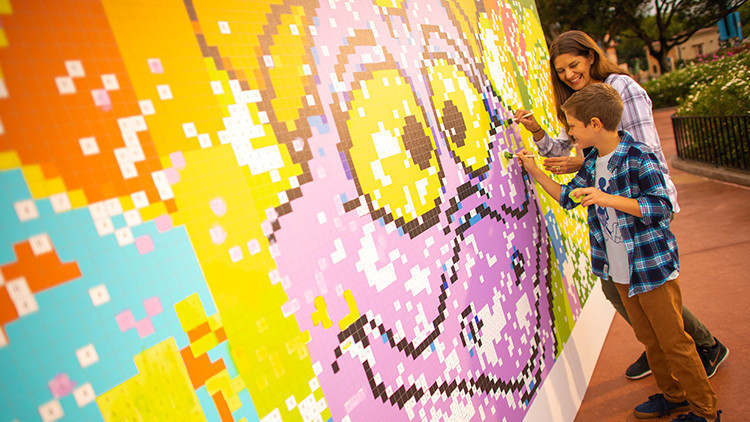 Ask any long-time EPCOT fan, and they’ll tell you that not to miss a trip to the Imagination Institute, where you’ll take a Journey into Imagination with Figment, the purple dragon who’s the mascot of the Imagination pavilion! This wholly original gem features the great Eric Idle as a professor trying to handle the unrestrained silliness of the audience’s own imagination aided by Figment’s antics.

12. The Seas with Nemo and Friends 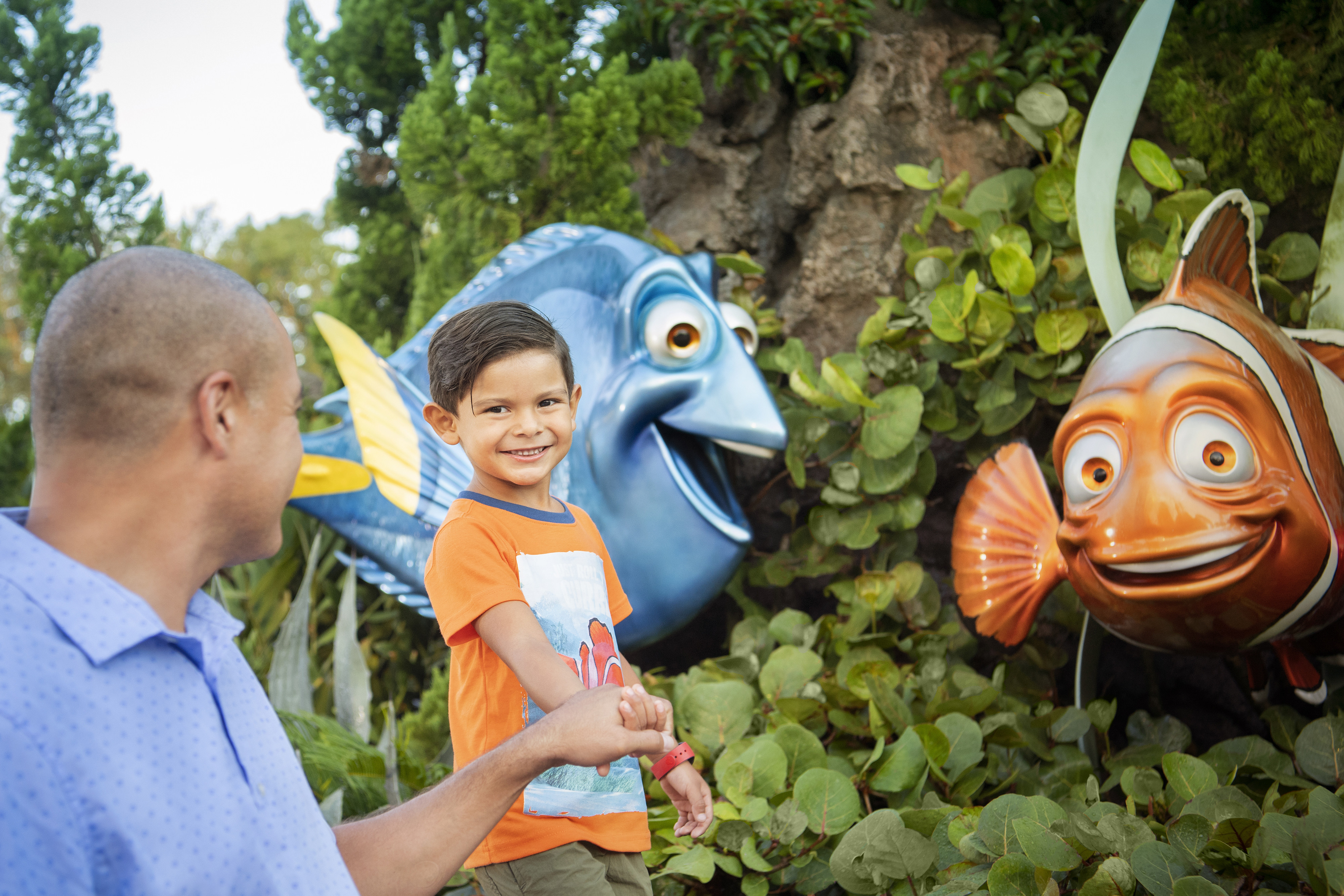 You can delight everyone with a trip through The Seas with Nemo and Friends. Ride along with Nemo, Dory, Crush, Marlin, and the rest of the gang as you explore the rich world of the deep and marvel at the blending of real world aquariums with your movie character guide. 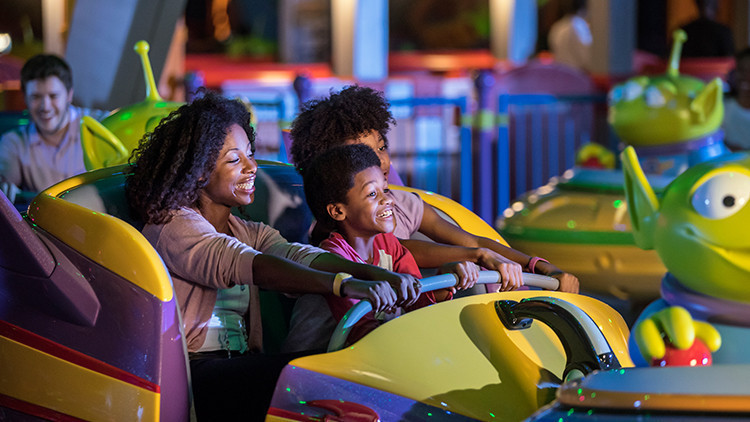 After racing around with Slinky Dog, switch things up and hop into the Alien Swirling Saucers for a fun flight through intergalactic space with everyone’s favorite green aliens. Just beware The Claw!

A Class All Its Own 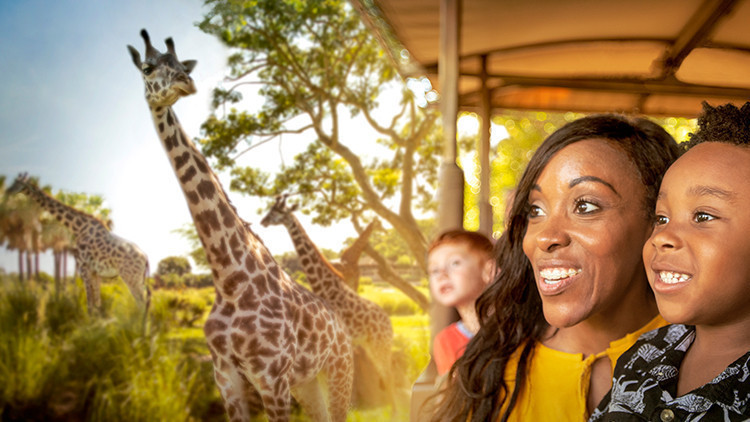 What trip to Disney’s Animal Kingdom would be complete, though, without seeing some wildlife? It may be virtual, but you can still experience the majesty of the East African savanna on Kilimanjaro Safari and encounter beautiful creatures in a meticulously maintained and authentic habitat. 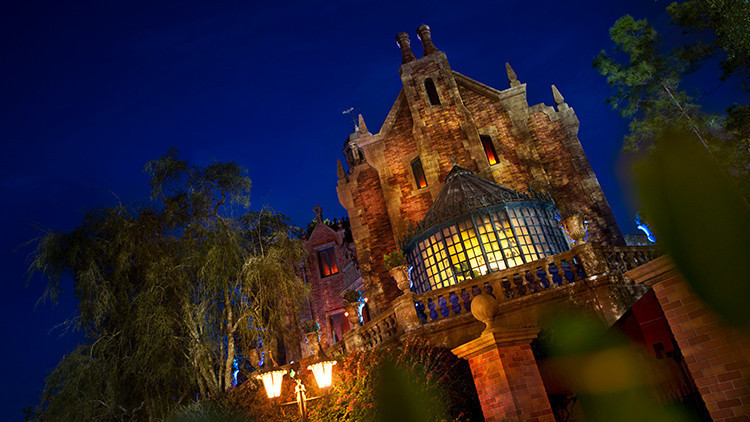 Of course, for the die-hard fans of the classics, there’s the devoted work of Disney Dan and his 10-hour loop of the sights and sounds from the eternal favorite Haunted Mansion attraction. For added relaxation, it’s looped with a calming thunderstorm effect, giving you the perfect excuse to ease into a Disney state of mind, wherever you might be.

THE MASTER WILL SEE YOU NOW...

Uncle Walt would agree that cloudy skies and rainy days will give way to sunny smiles and fresh flowers. We might not know what happens when you wish upon a star, but maybe these virtual tours will help your dreams come true in your own small world after all. 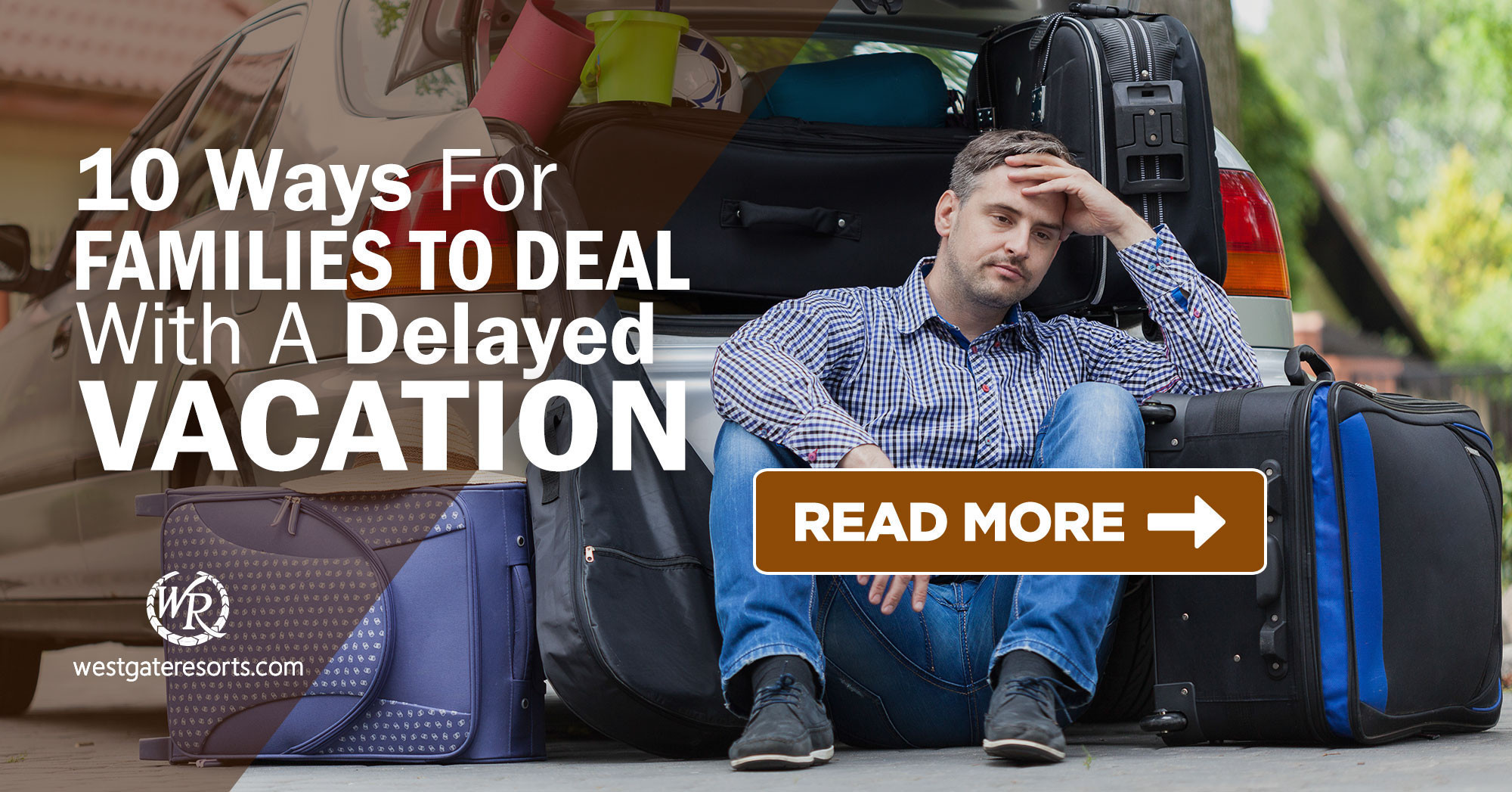