New York City is a very fast-paced place, and keeping up with all the trendy, new foodie destinations that are consistently growing can be a daunting task. In most cases, you don’t want to have to wait for two hours in a queue or book a reservation in advance to have a decent bite to eat.

For adventurous eaters, NYC is the place to be. There are some of the best rooftop restaurants in NYC and NYC Chinatown is one of the best in the world. Dedicated foodies will stand in longs lines to eat delicious food and will pay top dollar for it. Fortunately, there are a ton of secret and semi-secret foodie venues in NYC, each with a different culinary focus.

This article will bring to light 12 of the best foodie destinations in NYC that locals keep hidden. Keep reading to find out more about these exquisite, incognito pop-up eateries and supper clubs that are under the radar.

1 | Africa Kine | This foodie destination in NYC was established in 1996 and is operated in several locations by its two co-founders, Samba and Kine Niang, both of whom grew up in the city of Dakar. It was moved up north to a more compact location a few years ago and featured a menu that’s paradoxically longer than the original.

The restaurant offers Senegalese mainstays, such as "mafe" (chicken or lamb in peanut sauce), "thiebu djen" (stuffed vegetables and fish over rice) and "Yassa" (fish or chicken in an onion and lemon confit). At dinner, the restaurant offers a roast leg of a lamb, shrimp brochettes, grilled lamb chops, as well as baked fish. Presently, the restaurant only does deliveries and takeout.

The 20 Best Rooftop Restaurants in NYC

The 15 Best Irish Pubs NYC Locals Won't Tell You About

The 20 Best Bottomless Brunches NYC Locals Are Crazy About!

2 | Asian Spicy Curry | Asian Spicy Curry is located in a Chinatown luncheonette, and it provides a vibrant Malaysian food menu with lots of heat. If you’re considering going to this foodie destination in NYC, all you have to do is look for Mama Eatery, located on Mulberry Street, and search for Asian Spicy Curry. The restaurant doesn’t accept reservations yet.

The restaurant’s curry soups come with plenty of proteins, noodles and rice, and they’re fortified with loads of fish paste and mellow coconut. Vegetarians, meat-eaters and pescatarians alike will find a plethora of delicious cuisines that suit their tastes.

3 | Bohemian | Launched in 2009, this foodie venue is tucked behind a butchery that’s situated in a building that was once owned by Andy Warhol. To book a reservation, you’ll have to go with your foodie partners since the simplest route usually requires a referral-only unlisted telephone number.

Fortunately, Bohemian recently included an option of email introduction on its website. This means that booking a reservation is possible even for people without savvy dining partners. Once your reservation goes through, you’ll be treated to a six-course menu, featuring small plates that are influenced by American and Japanese cuisine. The highlights include meals such as pan-roasted branzino, uni croquettes served with mushroom cream, washu-beef sashimi and more.

4 | Dinnertable | To find this American and Japanese-inspired restaurant, you must go to the curtained area of The Garret bar and hit the doorbell on the wall that’s written “Push for Food.” When you ring this button, you’ll be escorted to a quaint dining venue that has a counter facing an open kitchen.

Here, you can observe the renowned Chef Ricky Arias and his team make delicious cuisines, such as octopus poke served with soy yuzu, ranch carrots served with nori and shiso ranch and popcorn ribs served with soy caramel. A significant portion of Dinnertable is used for walk-in parties, but there are limited reservations that potential customers can book with Resy.

New York City is a very fast-paced place, and keeping up with all the trendy, new foodie destinations that are consistently growing can be a daunting task. In most cases, you don’t want to have to wait for two hours in a queue or book a reservation in advance to have a decent bite to eat.

5 | Dining Room at the Metropolitan Museum of Art | Until recently, the restaurant facing Central Park on the fourth floor of the Met limited accessibility to only premium members of the museum. However, the Met opted to open its private dining arena to the public this year to enable customers to enjoy an American menu with a direct view of the Needle of Cleopatra.

Since the opening of the dining venue to the public wasn’t publicized highly, it remains to have a serene and quiet vibe. If the bustle and crowds at the museum begin to wear you down, then the dining room will offer you the much-needed refuge and a generous plate of Hamachi crudo. You can make reservations on OpenTable.

6 | Ganesh Temple Cafeteria | When you go to the Ganesh Temple Society’s basement, you’ll see a no-frills canteen with flat fluorescent lighting, community-centric bulletin boards and the finest dosas in the city. The canteen specializes in making crepe-like triangles from lentil batter and fermented rice.

The chefs at this restaurant usually stuff these triangles with creative fillings, such as spicy panner (butter, potato, cheese and masala gravy) and Pondicherry masala (onion, green chili, spicy chutney and potato). To keep the canteen’s low-key and casual style, the tables are walk-in only.

7 | Garfunkel’s | Although Garfunkel’s is mainly a cocktail venue, it also has afternoon tea services that can’t be compared to any rival in NYC. The vintage-influenced foodie destination is situated on a flight of stairs that's unmarked inside the Clinton Street burger place where evening customers can enjoy cocktails like the Quill and Monte Carlo.

From Wednesday to Sunday, the restaurant collaborates with Janam Tea to provide an English high tea service with brown butter cookies, cream cheese sandwiches, pots of Indian tea and scones with clotted jam and cream. To access this restaurant, you must make a reservation well in advance via its website.

8 | Knightshift | Mads Refslund, a Noma alum, established a hidden restaurant concept known as Knightshift as the prelude to this restaurant that’s upcoming in Williamsburg. It’s located at Meyers Bagheri, South Williamsburg. Since 2018, the pop-up has been serving various dishes. Although, the menu changes daily.

The popular dishes that have been served in the past include baked oysters served with parsley and celery, pickled duck leg served with red cabbage and salted cranberries, and butter-roasted brook trout served with fermented beans. The restaurant doesn’t support booking reservations, so it’s first-come, first-serve.

9 | Oxalis | Oxalis is a roving dinner series that deliberately has no permanent space. It blends the convivial nature of supper clubs with the unpredictability of a pop-up. Spearheaded by the highly-respected chef Nico Russell, Oxalis hosts plenty of dinners across NYC, but it’s often hosted at The Brooklyn Kitchen in Williamsburg.

If you’d like to stay updated on the restaurant’s impending dinner dates, you should join the mailing list on its site or follow the restaurant on Instagram. These channels can help you to grab enticing tickets to Oxalis’ six-course menu with seasonal and fresh cuisines, such as charred cuttlefish served with salted tomato and fennel or the vanilla-roasted sunchokes served with walnuts and mushrooms.

From beef goulash to stuffed cabbage, the restaurant serves outstanding renditions of comfort dishes from Eastern Europe. For decades, the Ukrainian East Village has been the neighbourhood staple, and it remains the go-to foodie destination for people who are longing for a taste of the ancient East Village.

11 | Wednesdays | For food enthusiasts who are bored of the restaurant setting, supper clubs offer an intimate substitute with an increased exclusivity level. An impressive example of such a supper club is Wednesdays, a dinner series that’s hosted bi-weekly in a loft apartment in Chelsea, New York.

Chef Jenny Dorsey, an Atera alum, offers a seven-course menu that is made to blend with cocktail flights that are prepared by Matt Dorsey. Some of the past dinners comprise Jerusalem artichokes served with fermented honey and turmeric, duck-fat grilled oysters and lamb pastrami that’s served with Szechuan peppercorns and red juniper.

To book a reservation, you’ll have to enter your email address on Wednesdays’ site. Organizers will let you know when you can go for the next dinner.

12 | Momofuku Ko | The restaurant features two separate spaces, The Bar at Ko and the main dining room. The Bar at Ko serves an ever evolving a la carte menu while the main dining room features a full tasting menu, all of which can be paired with an extensive beverage program offered by the eatery. Ko has earned two Michelin stars and has maintained them since 2009. Foodies who visited this restaurant say it was a top-notch experience that they won’t soon forget.

NYC Chinatown is a famous New York City staple, but the city has an eclectic mix of all kinds of food. You just have to look.

What food is NYC famous for?

NYC is famous for its pizza, bagels and cheesecake. However, the list goes on. Many over-the-top desserts and foods are created and made famous in New York City.

Which NYC borough has the best pizza?

It depends on who you ask, but Brooklyn is usually the place people name as having the best pizza in NYC.

What area should I stay in New York?

A lot of people say Midtown Manhattan is the best place to stay in New York City if it’s your first time visiting.

It depends on who you ask. Many New Yorkers will say yes because of its thin crust portability and iconic taste. However, if you go to Chicago, deep dish lovers will disagree.

Where is cool to stay in NYC?

Why is NYC food so good?

A lot of people say New York food is fresh, including its street food because it is always made in front of you. Also, a lot of high-end restaurants and chefs call New York home.

12 Eateries That Serve the Best Dumplings in NYC

The 15 Best Irish Pubs NYC Locals Won't Tell You About

The 10 Best Restaurants in Chinatown NYC!

These are some of the best foodie destinations that NYC locals keep hidden. They are hidden gems that provide a wide array of unique delicacies. However, before you visit, make sure to do brief research on their availability and pricing. For more foodie guides in NYC, visit our Westgate Resorts Travel Blog. 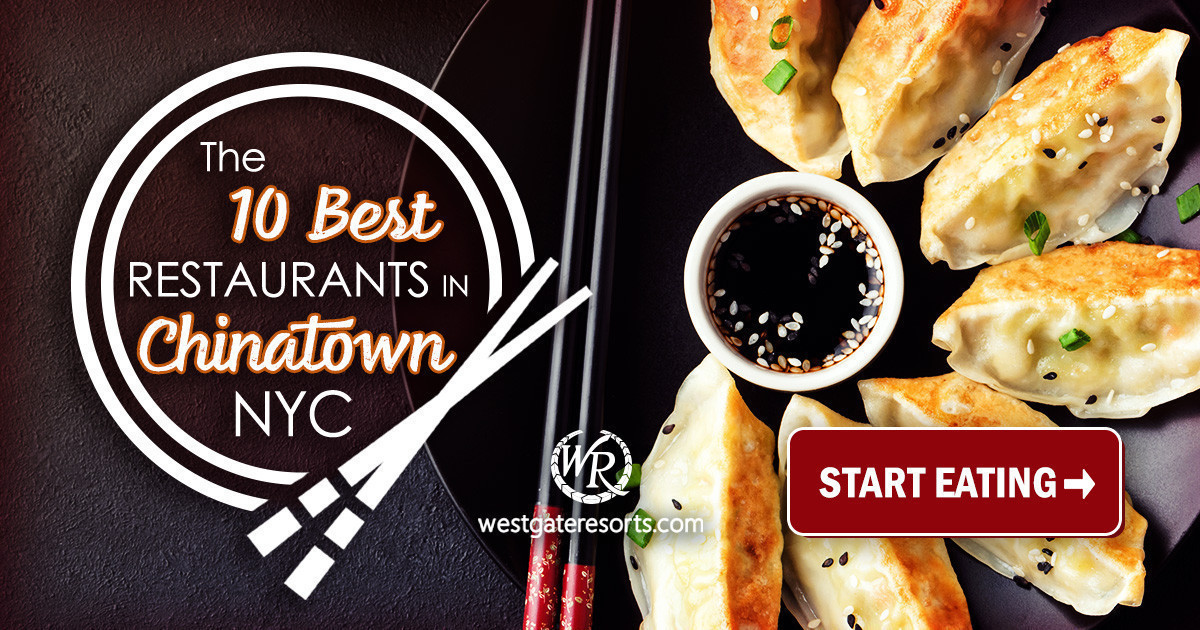