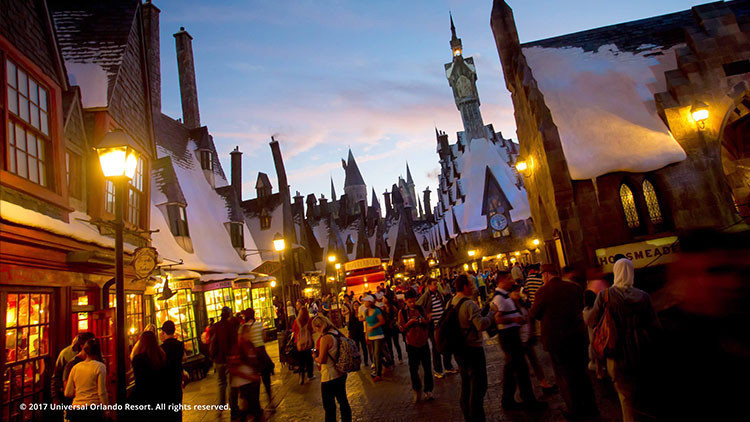 Nestled within Universal’s Islands of Adventure (between The Lost Continent and Jurassic Park), Hogsmeade is home to two amazing thrill rides: Harry Potter and the Forbidden Journey (located within Hogwarts Castle) and Dragon Challenge (billed as a “high-speed roller coaster across the sky”). In addition, Hogsmeade features a kiddie coaster called Flight of the Hippograff. Purchase an interactive wand at Ollivanders and enjoy a delicious bite to eat at Three Broomsticks, a rustic tavern that serves British pub fare such as fish & chips, shepherd’s pie, rotisserie chicken, ribs, salads and Butterbeer (a nonalcoholic beverage that tastes like a combination of butterscotch and cream soda). Relax and unwind in the Hog’s Head pub, which offers domestic and imported beers, specialty drinks, wine, spirits and mixed drinks. Shop for assorted treasures at Filch’s Emporium of Confiscated Goods; magical supplies and wizarding equipment at Dervish and Banges; and incredible treats at Honeydukes, the legendary sweetshop at Hogsmeade.

With park-to-park admission or an annual pass, guests can ride the Hogwarts Express to travel between both lands and truly immerse themselves into The Wizarding World of Harry Potter (the special effects aboard the train are truly amazing – watch out for those Dementors!). Guests may board Hogwarts Express at Hogsmeade Station in Hogsmeade or King’s Cross Station in Diagon Alley. 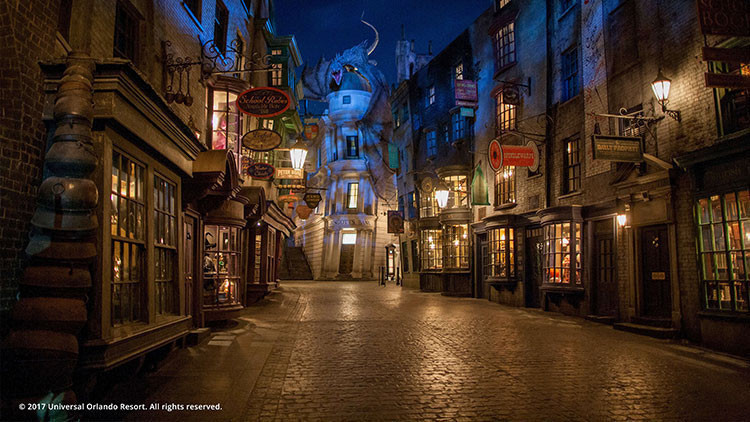 Cleverly tucked into the Northeast corner of Universal Studios Florida (between San Francisco and World Expo) Diagon Alley was built on the site of the former Jaws ride (in the window of Mr. Mullpepper’s Apothecary, you can view a set of shark’s teeth that serves as a tribute to Jaws). Diagon Alley is home to the thrill ride Harry Potter and the Escape from Gringotts, as well as the purple, triple-decker Knight Bus (where guests can chat with a shrunken head hanging from the rear-view mirror!), Ollivanders wand shop, Gringotts Money Exchange and many corridors full of Harry Potter specialty stores such as Weasleys’ Wizard Wheezes, Borgin and Burkes, Magical Menagerie, Madam Malkin’s Robes for all Occasions, Wiseacre’s Wizarding Equipment and Quality Quidditch Supplies. Dining options within Diagon Alley include Leaky Cauldron (fish & chips, bangers & mash and cottage pie) and Florean Fortescue’s Ice Cream Parlour. Try some Butterbeer at Fountain of Fair Fortune or a draft beer at The Hopping Pot.

10 Thrilling Things to Do in Orlando at Night

When visiting A Celebration of Harry Potter, stay at Westgate Palace Resort, a Two-Bedroom Villa Resort. Plus, Just minutes away from Universal Orlando.

Final Tips On Your Next Orlando Getaway

Whether you're looking for free things to do in Orlando, or just some great Florida day trips, we've got the best family hotels in Orlando for your family vacation! With so much to enjoy in Central Florida, it's no wonder that Florida getaways are the number one vacation booked in the U.S.A. today! Looking for something new and different? Explore a dude ranch family vacation, get going on some Central Florida hiking trails, or start your vacation off with some sweet, spooky side-trips to these great haunted places! No matter what your style, we've got you covered here on Westgate's travel blog!