With summer's memorable Manhattanhenge moments behind us and Fall's best NYC Festivals now fading away, it's time to hail the holiday spirit as we explore NYC from the festive point of view. Christmas in New York City brings to mind ice skating in Rockefeller Center, horse-drawn carriage rides in Central Park, colorful holiday window displays along Fifth Avenue and, of course, paying an obligatory visit to Santa Claus at Macy’s on 34th Street. Top it all off with an amazing dining experience at one of the 10 best Christmas decorated restaurants NYC has to offer! Make sure to ring in the holiday season and soak up some Christmas spirit Big Apple style at these amazing New York City eateries that go totally overboard with blizzards of sparkling holiday lights and decorations. So, join us as we go undercover in Manhattan to highlight these happy holiday hangouts where all the locals dine during the Christmas season! 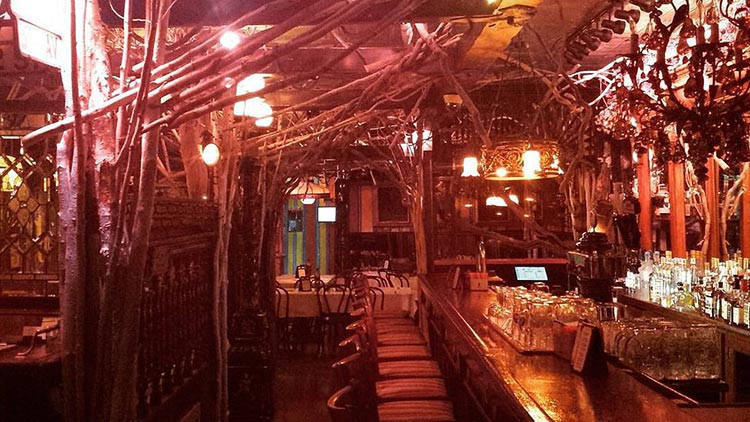 If you had to pick a single NYC eatery that goes all out for Christmas with obsessive fervor, it would invariably have to be Rolf’s, a traditional German restaurant located in Gramercy Park that draws visitors from around the world during the holiday season. Enter a winter wonderland of thousands of sparkling lights, ornaments, icicles and even creepy Victorian-era dolls. The entire holiday affair carries an estimated price tag of $65,000 annually, according to Business Insider, which has named Rolf’s “New York’s most festive restaurant.” Typically, the Christmas decorations start going up at Rolf’s toward the end of September and are completed gradually over a six-week period. Don’t worry if you can’t make it to Rolf’s during the holidays – the Christmas decorations usually stay up here throughout the spring, making this local haunt a double-whammy if you just happen to be looking for some weird things to in NYC at night sometime! Rolf’s also features special holiday-themed cocktails such as spiced eggnog and mulled wine for festive imbibers.

Christmas in New York City: A 12 Days Of Christmas Guide To NYC

The 25 Best Places to Take Pictures in NYC

If you ever want to dine at a lovely relaxing place in NYC at Christmas time, head to Tavern on the Green near the Strawberry Fields in Central Park. This spot is home to the best cocktails in Manhattan. The chillaxed vibe is honestly a beautiful site with pretty lights that accentuate the immaculate atmosphere. There's a glassed greenhouse area with a lovely view of the deck and picturesque Central Park. The menu truly offers something for everyone. There's a menu for lunch, dinner, weekend brunch, children, dessert, holiday brunch - even bar food, and the holiday season. Each year, Tavern on the Green hosts a Christmas Tree Lighting with complimentary treats and drinks. Expect live music and an awesome show from The Manhattan Holiday Carolers.

Billed as “an everyday grand café and bakery in ceremony of French cooking,” this bustling NoHo eatery – the brainchild of esteemed chef, Andrew Carmellini – exudes an inviting holiday vibe with large Christmas wreathes and garlands strewn all about the place. In addition, Lafayette is known for its delicious holiday desserts such as lemon meringue tart, and its proximity to scores of nearby holiday markets in NYC. The New York Observer has dubbed Lafayette “The Great Gatsby of Restaurants” for its “shimmering elusiveness that assures immortality.”

With its entire ceiling covered with bright lights, along with wreaths, garlands and ornaments hanging everywhere (and an amazing holiday window display to boot!), this landmark NYC bar offers a warm, cheerful holiday atmosphere each Christmas season. Established in 1864, Pete’s Tavern is New York City’s oldest continuously operating bar and restaurant. In fact, during Prohibition, Pete’s stayed open as a bar disguised as a flower shop! Trivia buffs need to know that writer O. Henry (William Sydney Porter) is alleged to have penned his famous short story “The Gift of the Magi” (one of the greatest Christmas stories of all time) at this Gramercy Park eatery. Don’t miss the opportunity to sample the delicious homemade eggnog while you relax and unwind at Pete’s Tavern.

This classic German-inspired tourist restaurant is the perfect spot to eat at throughout the wintery Christmas season. During this time, the eatery is decked out with a 25-foot tall Christmas tree lit at a festive lighting ceremony along with a 10-foot Santa sled. If you're looking for merry moments with a jolly menu and merry decor, head to this spot for your holiday meal. 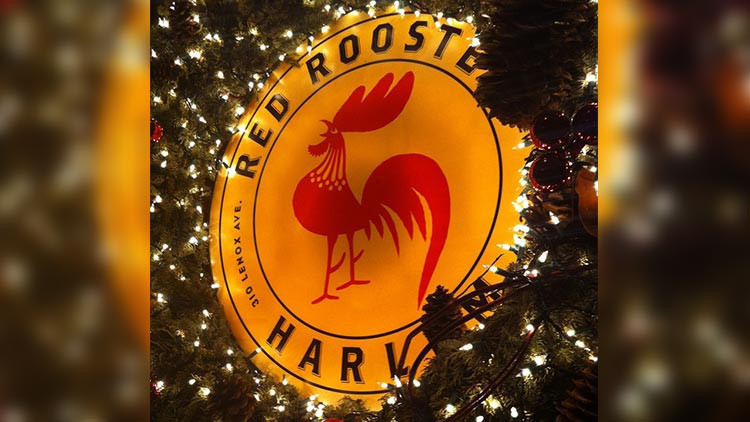 Red Rooster Harlem by Per Olof Forsberg / Licensed under CC BY 2.0

Get into the spirit of the Christmas season at this stylish comfort food eatery nestled in the heart of Harlem that celebrates “the roots of American cuisine.” Named in honor of a legendary Harlem speakeasy, Red Rooster Harlem is the brainchild of celebrated chef Marcus Samuelsson. The lively atmosphere at Red Rooster Harlem includes a fully decorated Christmas tree out front, along with sparkling lights and decorations throughout the eatery. In addition, Red Rooster Harlem features live music and an eclectic menu that features popular entrees such as Poppa Eddie’s Shrimp & Grits, Hot Honey Yardbird, The Representin’ Ribeye and Jukebox Fish Fry.

Celebrate the holiday season “in classic New York style” at the upscale ‘21’ Club (a former speakeasy during the Prohibition Era) with its multitude of Christmas trees and colorful lights. Diners may even catch a performance of the Salvation Army Band performing Christmas carols on select dates in December (believe it or not, a tradition that dates to 1936). By the way, many U.S. presidents have dined at ‘21’ over the years – including Franklin D. Roosevelt, Dwight Eisenhower, Richard Nixon, Ronald Reagan and Bill Clinton, among others. You can’t miss ‘21’ Club – 35 multicolored jockeys line the steps to welcome you to this iconic Midtown West eatery!

An “Irish-influenced” pub with retro 1960’s décor and a laid-back vibe in the Lower East Side, The Late Late Bar & Spirit Grocer celebrates a “Tacky Winter Takeover” each December with plenty of outrageous Christmas decorations, along with an amazing selection of specialty holiday cocktails. In addition, patrons can choose from more than 50 Irish whiskeys, as well as appetizers, salads, wings and pub fare such as the Cheese Toasty and Bally Maloe Burger. By the way, The Late Late was named after The Late Late Show, Ireland’s longest-running TV talk show.

Not only is this Greenwich Village eatery decorated with colorful wreaths, garlands and strings of festive lights, but it offers the holiday novelty of a massive Christmas tree on the roof! Guaranteed to boost your holiday spirits, Rosemary’s features a cozy, rustic dining room and serves seasonal, farm-to-table cuisine. By the way, Eater NY has named Rosemary’s as “one of the best date night restaurants in Manhattan.”

Bottom line, there's no shortage of culinary curiosities in Manhattan to satisfy your yuletide yearnings during the holidays, so whether you're just crawling your way through the best bars in midtown, or have a hankering for a unique Manhattan wine bar experience under the mistletoe, you're sure to find Christmas lurking around every corner. Looking for a home base for the holidays that puts you right in the middle of midtown's best dives and diners? Check out our New York City hotel, with limitless options and incredible NYC balcony rooms with views of the city (and also Manhattanhenge 2022) you simply can't beat for the holidays!

Love our destination travel blog guides? Find out more about free museums in NYC, discover Volcano Bay, explore the natural wonder of Table Rock Lake, and learn about where to go do karaoke in NYC,.... PLUS... try the best Florida beaches for families, all at these links! 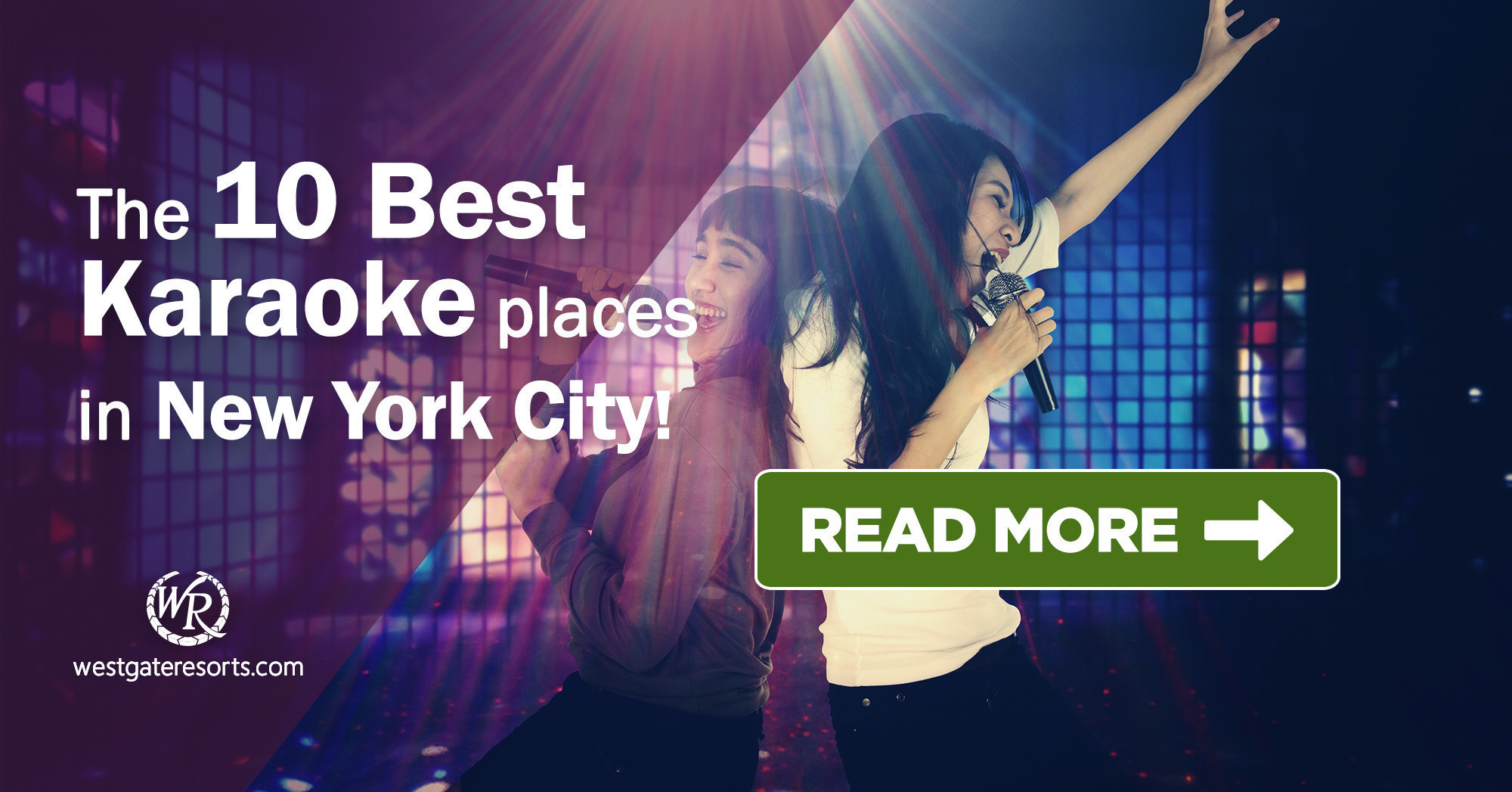