“The city seen for the first time, in its first wild promise of all the mystery and the beauty in the world.” – F. Scott Fitzgerald

The Big Apple is undoubtedly one of the most famous cities in the world and a visit here is on just about everyone’s bucket list. From the time you set foot outside any of the hotels near Grand Central Station, the sights, sounds, food, culture and the people, New York City is simply a place unlike any other in the world. This is part of what makes it a once-in-a-lifetime travel destination. According to NYC entrepreneur Pam Nelson, “If you are greedy for life, that’s what New York is all about. If you’re trying to get as much as you can every day, this city is the place to be.”

Indeed, there are so many famous landmarks and sights that have been etched onto the collective imagination that it’s rather easy to fill up your itinerary whether it’s for a short or long-term vacation. This includes the Empire State Building, Central Park, of Liberty, Times Square, Rockefeller Center, Dumbo (Down Under the Manhattan Bridge Overpass), Metropolitan Museum of Art, High Line, the One World Observatory and much more.

With so many different attractions to choose from, where do you go first? If like us, you feel stressed out whenever you’re presented with a multitude of options, then you’ll enjoy the following list of great New York City tours that will help you take in as much of this fascinating city as you can before you head back home. Read on for more.

One of the best ways to experience New York City to the fullest is through guided tours from experienced and knowledgeable professionals. That way, you don’t even have to prepare an itinerary or figure out where to go or what’s the best time to visit certain sights or landmarks.

It’s certainly a great way to see and experience New York City, especially for first-time visitors, because there’s just so much to see and do here that you could easily miss out on some of the best spots from lack of knowledge. Plus, what better way to see the Big Apple than through the eyes of a trusted insider who’ll take you to all the secret spots?

Here are some of our favorite in-depth New York tours that’ll leave you with a deeper understanding and appreciation of this amazing city.

1 | 5.5-Hour Tour of the New York City | This fun-filled 5.5-hour tour of New York City starts at Central Park West and goes all the way to Manhattan of Sex and the City fame. It passes through such notable landmarks as the Empire State Building, Radio City Music Hall and the Flatiron Building (built in 1902 and designated a National Historic Landmark). Aside from all the famous attractions that this tour exposes you to, the most fun part is actually getting a flavor of the colorful local areas and neighborhoods, which are unlike anything you’ll ever see anywhere else. From Harlem to Wall Street and Chinatown to Little Italy, you’ll find yourself pointing at buildings that you may have seen in movies and TV series ranging from The Godfather to The Sopranos, or taking pictures in your favorite rapper’s neighborhood.

11 of the Best Escape Rooms in NYC

2 | 4-Hour Tour of the Statue of Liberty and Ellis Island | The 305-foot-tall Statue of Liberty on Liberty Island in New York Harbor is often referred to as Lady Liberty and she’s definitely one of New York City’s most beloved attractions. However, the Statue of Liberty’s immense popularity means that millions of people come to see her annually and it’s often packed with tourists daily. That is except for the four hours during which this guided tour happens. By signing up for this guided tour, you’ll be able to view the Statue of Liberty VIP-style. That means no standing in long lines or queues, and you’ll have your own special tour guide to answer any and all questions that you have about this fascinating monument. Some of the information you’ll learn through this tour includes the history of the Statue of Liberty, its architectural style and the grounds, along with some of the myths and stories associated with this cherished NYC landmark. You’ll also get to enjoy some amazing views of NYC’s spectacular skyline without throngs of other tourists obstructing your view.

3 | Washington, D.C. Day Trip | History buffs rejoice! Since you’re in the United States, why not take a detour for the day to the nation’s capital, Washington, D.C.? Through this epic day trip from New York City, you’ll see Capitol Hill, the Senate House, the White House and many other significant landmarks of this iconic city. Once you’ve taken a few pictures in front of the White House, your tour will take you to the historic Smithsonian Air and Space Museum and the National Mall where you’ll see moving memorials to Vietnam and Korean veterans, as well as the Lincoln Memorial and much more. Just a short distance away, you’ll also visit the Arlington National Cemetery, which serves as the final resting place of more than 400,000 war casualties and veterans, including President John F. Kennedy, whose grave is marked by an eternal flame.

4 | Harlem and Bronx Hip-Hop Bus Tour | The Birthplace of Hip-Hop Bus Tour is one of the most popular tours in all of America and for good reason. It doesn’t matter if you’re a hip-hop fan or simply a curious observer of pop culture. You’ll appreciate the way in which this tour takes you back in time to the origins of one of the world’s most famous music genres. Not only that, but you’ll have as your guides such hip-hop greats as Rahiem from Grandmaster Flash and the Furious Five, Reggie Reg from Crash Crew and the legendary Kurtis Blow. You’ll learn at the feet of masters about the evolution of hip-hop while visiting important landmarks that played a huge role in the development of the genre such as the Graffiti Wall of Fame and the Apollo Theater, among others. Although this is a four-hour tour, you’ll feel as though you’ve been there for only 30 minutes. That’s how fascinating it is and how much there is to take in as you get a glimpse of the fascinating history of hip-hop.

5 | Helicopter Tour Over New York City | This exclusive helicopter tour gives you a spectacular bird’s eye view of New York City. The skyscrapers, lush greenery of Central Park and even the Times Square Jumbotron look completely different from the top than they do at eye-level. This is no short tour either because it takes you through all of New York City’s heavyweight attractions, including Central Park, Statue of Liberty, Empire State Building and much more. Bottom line: The New York City Deluxe Helicopter Tour is a dream come true for anyone who wants to experience New York in a unique and exclusive manner.

6 | 4-Hour Tour of Harlem Gospel | Get your church on with the four-hour Harlem Gospel Tour which takes you on a special gospel mass. On the way, you’ll see famous Harlem landmarks like the massive Cathedral of St. John the Divine (the sixth largest church in the world by area), Morningside Heights, Colombia University and many others. This once-in-a-lifetime experience is characterized by uplifting harmonies that’ll make you feel as though you’ve stepped into a world-class performance theater. Apart from the powerful energy that this space exudes, you’ll walk away with an impactful message for your life that will help you understand why this tour is so popular among New York tourists.

7 | Bronx, Brooklyn and Queens Half-Day Tour | We’re all familiar with Queens, the Bronx and Brooklyn as being three of the most iconic boroughs in New York and also the birthplace of great artists like Alicia Keys, Jay-Z, Ella Fitzgerald, the Beastie Boys and many others. Part of what makes these areas so special is the fact that they are a melting pot of cultures that include Russian, Greek, Italian and Caribbean-American, among many others. Plus, this tour is the epitome of going off the beaten path to truly experience the nexus of New York culture. It gives you an opportunity to connect with the locals and hear real stories of what it’s like to live and exist in these famous spaces. Don’t forget to take a few selfies at some of the iconic streets and landmarks like Arthur Avenue, Brooklyn Bridge, the Bronx Zoo and City Island to show off on your Instagram.

8 | Ground Zero 9/11 Memorial Tour | If you’ve ever been curious as to what has become of the 9/11 site, also known as Ground Zero, then this tour is a must. It’ll take you on a journey to the 9/11 Memorial where you’ll hear stories of tragedy, bravery and hope from knowledgeable guides who were either at the incident or personally know people who were affected by the event. You’ll also visit St. Paul’s Chapel and the 9/11 Museum where you’ll walk away with a deeper appreciation of the resilience of the American people after going through such a significant event.

9 | Hop-On, Hop-Off New York Harbor Cruise | Hop around New York City in this fun and exciting tour that starts a cruise aboard a water taxi at Midtown Manhattan’s Pier 79 to then embark on a 90-minute guided cruise through the Hudson River, which offers a unique perspective of the Brooklyn Bridge, New Jersey skyline, Ellis Island and the Statue of Liberty. The tour has four official stops where you’ll hop off in order to hop aboard the next boat that will take you by Wall Street, the Empire State Building and the 9/11 Memorial. A boat departs every 45 minutes from morning until 6 PM, so there’s plenty of opportunities to add it to your itinerary.

10 | 2-Hour Graffiti & Street Art Tour | As the name implies, this is a fascinating graffiti and street art tour that’s aimed at teaching participants about the art of graffiti and its contribution to the New York landscape and history. Graffiti aficionados will marvel at the different colors, sizes and styles that graffiti can take. You’ll also learn about the different techniques that artists use and the inspiration behind their creations. There’s no doubt that you’ll walk away with a true appreciation of urban street culture as well.

Use Our Handy Map to Find The Right Tour For You!

Be sure to add a few of these tours to your itinerary for a full and satisfying trip to NYC. You’ll come back with lots of commemorative snaps, souvenirs and unforgettable memories to share with your loved ones when you get home! And as you explore the rest of the Big Apple during your stay, don’t miss the opportunity to check out the 10 best bars in NYC, 10 things to do just outside NYC and 10 ideas to try in Central Park. Have a great trip! 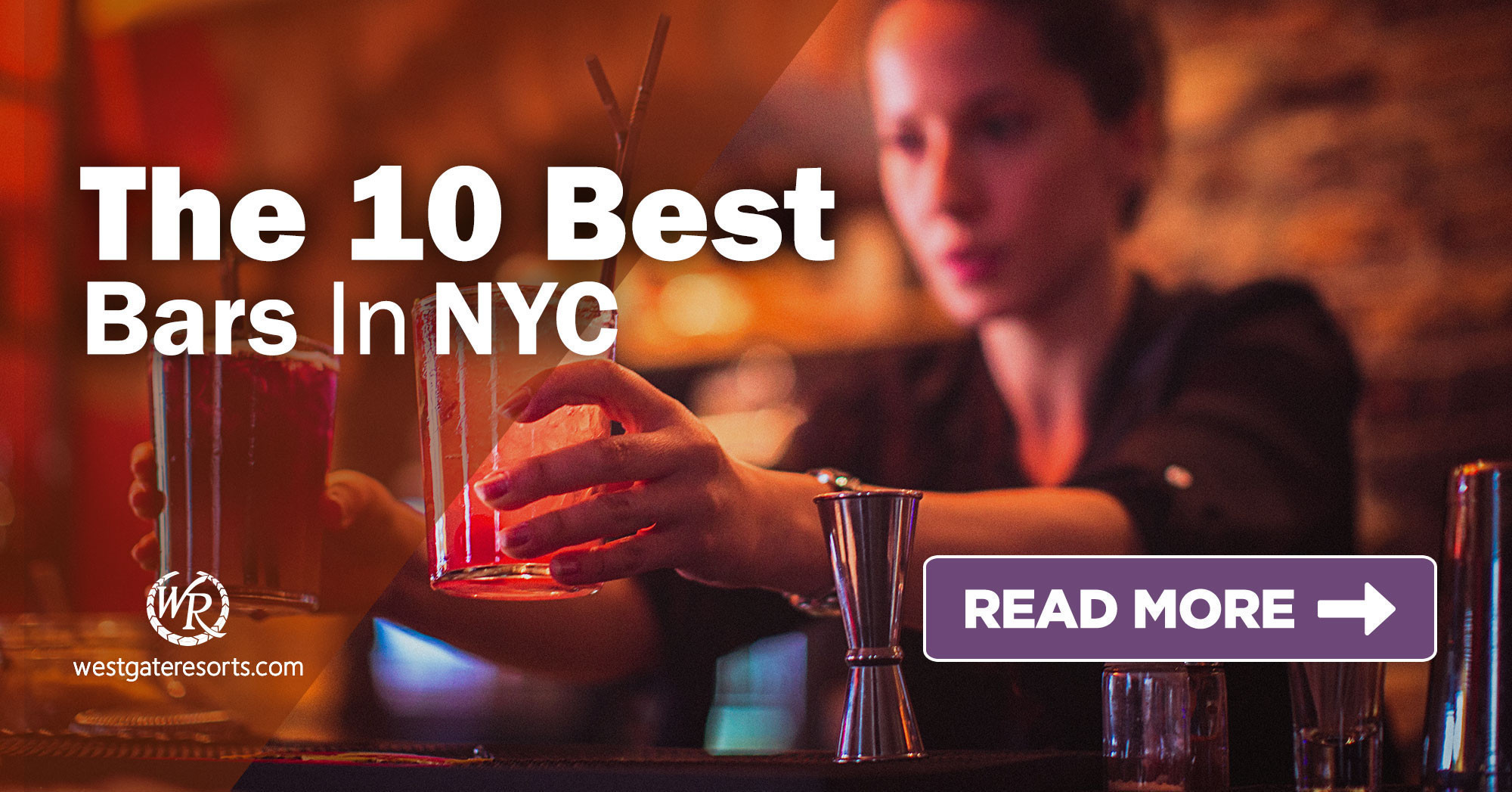