Discover The Best Bars on International Drive in Orlando

“I love this bar, It’s my kind of place. Just walk in through the front door, Puts a big smile on my face. It ain’t too far, come as you are.” - Toby Keith, “I Love This Bar”

When it comes to trendy nightlife, and things to do in Orlando, this town is still a little ways away from being compared to legendary hotspots such as South Beach, the Las Vegas Strip and Midtown Manhattan. However, the city beautiful is quickly closing that nightlife gap, with a growing selection of premier restaurants on International Drive in Orlando, local Central Florida bars and hangouts that are popping up all over the landscape, and everything else from cigar lounges to escape rooms on International Drive, filling in the rest. Those Orlando visitors who need to take a break from the hustle and bustle of the theme parks can seek refuge at the myriad of lively bars and nightclubs that can be found in places like Downtown Orlando, Universal CityWalk, Disney Springs (formerly Downtown Disney) and especially world-famous International Drive. In fact, I-Drive, the heart of Orlando’s most dynamic tourist district, is home to some of the hottest nightclubs, bars, comedy clubs, dinner shows and authentic pubs in Central Florida.

When you're done with Disney World and taking a break from pounding waves of Volcano Bay for the day, here are the 12 best bars on International Drive in Orlando where you can soak up the atmosphere, catch an amazing live band or stand-up comedy act, or simply relax and unwind with your favorite cocktail or craft beer:

1 | Tin Roof | Ideally located in the heart of International Drive and adjacent to The Wheel at ICON Park (400-foot-tall observation wheel), Tin Roof (TR) is “a live music joint” that showcases talented local and regional bands most nights of the week and provides musicians with a laid-back atmosphere to hang out when they aren’t on stage. Guests of Tin Roof (motto: “Where Everybody is Somebody”) who enjoy the live acts, eclectic atmosphere, delicious food and killer cocktails often quickly turn into TR regulars. An added bonus of Tin Roof is the “Southern based Better Than Bar Food” that includes such delicacies as Dixie Biscuits (fried biscuit sliders), Chicken N Waffles, Smashville (custom beef patty topped with barbecue-pulled pork, bacon and slaw), Shrimp Po Boy and Voodoo Grinder (featuring shrimp and sausage stewed Creole style). Signature drinks at TR include the Tin Gin Mojito, The Roof Rita, Old Fash-Tin, Tea is for Tennessee, Painkiller and Rumrunner, among others. Happy Hour takes place weekdays at Tin Roof between 3 PM and 7 PM. The outdoor seating at TR is perfect for people watching and also offers some spectacular views of the huge observation wheel.

15 Restaurants on International Drive Orlando You Have to Try

10 Things To Make This Your Best Family Dude Ranch Vacation

2 | Bar Louie | Join the “Gastrobar Revolution” at Bar Louie, a lively International Drive neighborhood-style bar (located across the street from Pirate’s Cove Adventure Golf and less than a mile from ICON Park) known for its fresh artisan cocktails (including martinis, mojitos, sangrias and margaritas) and whose motto is “Eat, Drink, Be Happy.” Bar Louie, which is open nightly until 2 AM, also features a popular late-night Happy Hour and a diverse menu that includes appetizers, flatbreads, burgers, sandwiches and salads, as well as Seared Salmon, Braised Short Ribs, Chicken & Churros, Drunken Fish & Chips and Voodoo Pasta. Although Bar Louie is actually a chain of more than 130 award-winning bars across the United States, each location offers a true local flavor and that rings especially true for the International Drive location as well.

4 | Lucky Leprechaun Irish Pub | Nestled at the far end of a rather nondescript strip mall located just across the street from the Magical Midway Thrill Park, Lucky Leprechaun Irish Pub is billed as “I-Drive’s only Irish owned and operated pub.” Lucky Leprechaun features a variety of imported beers and ciders – including Irish favorites like Guinness, Harp, Murphy’s Stout and Magners Irish Cider – in a casual sports bar atmosphere, along with live music, pool tables, outdoor patio and plenty of flat-screen TVs tuned to all the latest sporting events. In addition to being the official Glasgow Celtic Supporters Club of Orlando, it’s also the home of the Guinness Perfect Pint Award and the Golden Tap Award. Sláinte!

5 | B.B. King’s Blues Club | The late, great blues legend B.B. King (aka “The King of the Blues”) once remarked, “Blues is a tonic for whatever ails you. I could play the blues and then not be blue anymore.” If blues is your thing, “boogie on down” to B.B. King’s Blues Club, which is located on the second level of Pointe Orlando on International Drive. Highlights include live blues nightly by the B.B. King All Star Band (as well as classic rock, R&B, funk, Motown and Memphis soul), a dance floor, two outdoor patios, specialty drinks such as the Hoochie Coochie Man (Stoli Vanilla, melon liquer, cranberry and pineapple juice) and a great menu that features delicious Southern-style comfort cuisine, including authentic Memphis-style barbecue and “lip smackin’ ribs.”

6 | Vault 5421 | Billed as a “Post-Apocalyptic Themed Craft Beer Bar” (not kidding!), Vault 5421 lies within Gods & Monsters comic book and action figure collaborative at Orlando Crossings Mall. Opened on International Drive as a refuge for “road warrior vagabonds” against “those pesky radioactive zombies,” Vault 5421 features an end-of-the-world, “Mad Max” style vibe that harks back to the likes of both Fallout and Resident Evil, while offering a variety of beer, ciders, meads, wines and mixed drinks. Rentable demo boardgames are available. As you might expect, Vault 5421 isn’t for everyone. However, if you desire a one-of-a-kind, immersive, mind-blowing bar experience on International Drive, this is the place to be! Vault 5421 is open Wednesday, Friday and Saturday nights only.

7 | ICEBAR Orlando | Known as “The Coolest Bar in Orlando,” the world-famous ICEBAR Orlando is another eclectic bar experience on International Drive that you have to visit at least once and knock off your bucket list. Allegedly “the largest permanent icebar in the world,” ICEBAR Orlando features 70 tons of hand-carved ice and has been featured as one of the “Top 10 Bars” on the Travel Channel’s Extreme Barhopping reality series. Guests arrive via the FIRE Lounge (which itself features a full-service bar, nightly entertainment, live DJ and state-of-the-art sound and lighting) and are greeted by an “Ice Princess” who provides them with thermal coats and gloves for their “Arctic journey.” They then enter a “Winter Wonderland” where they can enjoy perfectly chilled cocktails, while admiring the spectacular frozen sculptures (perfect for photo ops and selfies!).

10 | Blue Martini | Popular with the after work professional crowd, Blue Martini is a trendy upscale lounge at Pointe Orlando on International Drive that features radiant cocktail servers, a knowledgeable bar staff and a “legendary” Happy Hour with special discounts on the entire menu. Later in the evening, Blue Martini turns into more of an energetic nightclub with live bands/DJs and a dance floor. From the casual outdoor patio with its large-screen TVs tuned to sporting events to the exclusive VIP lounge, Blue Martini has something for everyone. As you might expect, Blue Martini offers a wide selection of specialty martinis (including the rather decadent Chocolate Martini), as well as craft cocktails, beer, wine and a tapas-style menu full of mouthwatering appetizers.

11 | Howl at the Moon Orlando | Seeking a high-energy bar experience on International Drive? Look no farther than Howl at the Moon Orlando, a lively, interactive dueling piano bar where you can sing and dance and laugh along to a variety of party anthems, dance hits and classic rock favorites – ranging from Billy Joel’s “Captain Jack” to Lady Gaga’s “Poker Face” – and everything in between! A full bar is available and features novelty bucket drinks such as Howlin’ Punch, Hurricane, Mai Tai, Pink Paradise, Passion Paloma, Island Cooler, Howlin’ Mule, Sex on the Moon, Fruit Roll Up and Adios Mofo. Howl at the Moon Orlando is located on International Drive between Bahama Breeze and Senor Frog’s.

12 | Cheers Sports Bar | No list of International Drive nightlife is complete without including a great neighborhood dive bar and Cheers Sports Bar fits the bill! The perfect spot to watch your favorite sporting event while enjoying burgers, sandwiches, wings and daily drink specials in a laid-back atmosphere, Cheers is also home to the only liquor store on I-Drive open until 2 AM. Cheers also features pool tables, dartboards and arcade games.

BONUS | Sky Bar 360 | Enjoy a round of drinks at “Orlando’s First Bar in the Sky!” The Wheel at ICON Park, a 400-foot-tall observation wheel (formerly known as the Coca Cola Orlando Eye), now offers Sky Bar 360, a bottomless beer and wine bar that offers spectacular views of International Drive and beyond. With a Sky Bar ticket, guests can enjoy admission to The Wheel, as well as all-you-can drink beverages (including local Florida craft beer) in a private capsule for up to 10 guests. In addition to The Wheel, ICON Park is home to Sea Life Orlando Aquarium, Orlando StarFlyer (the world’s tallest StarFlyer at 450 feet), Madame Tussauds Orlando, SKELETONS: Museum of Osteology, 7D Dark Ride Adventure, Arcade City and Pearl Express Train.

Browsing The Best Bars In Orlando?

There's no doubt that Orlando's dining scene has been exploding in recent years, and International Drive is at the heart of it! But if you're want to stray a bit further from our family friendly hotels in Orlando, you might want to check these great Orlando breweries, hidden haunted places to snap a spooky selfie, or hit the road with this great collection of fun day trips in Florida you can try! So no matter where you're longing to wet your whistle, rest assured that International Drive has the craft cocktails and authentic pubs to make all of your late-night bar crawl dreams come true! Whether you're looking for breakfast off of International Drive, the best sports bar in Orlando, or the best attractions International Drive has to offer, Westgate has you covered! Ready to try something more adventurous? Check these epic Orlando escape rooms or get your fill at one of the best restaurants International Drive can serve up before hitting that nightcap! 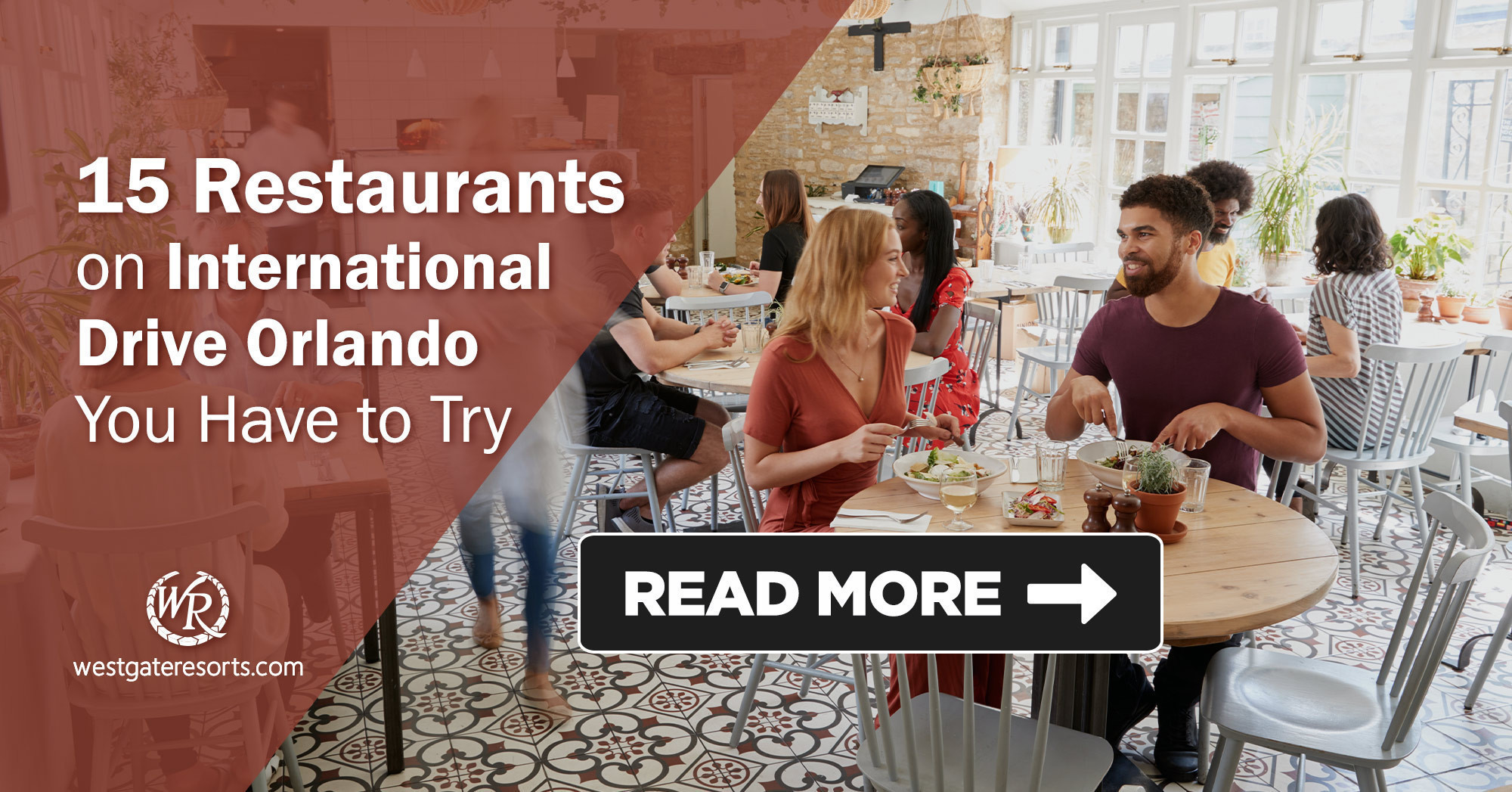 * Westgate Resorts is in no way affiliated with the bars or restaurants featured in this article. Menu items listed are current as of the publishing date of this article. Please call or visit the respective website for each restaurant for the most up-to-date offerings.